Constitution of IRI has Fundamental Weaknesses, but not Implemented Well 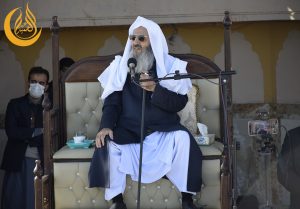 The most influential Iranian Sunni leader described discrimination and illegal behaviors of authorities against Iranian people as the basic problem of the country.

Addressing the people of Zahedan in the presence of tens of thousands of worshipers on December 30, 2022, Shaikh Abdol-Hamid talked of unity, love, and women’s rights amid anti-government nationwide demonstrations and said: “The constitution of the Islamic Republic of Iran has fundamental weaknesses and despite these weaknesses, it has not been implemented well.”

“Tasteful treatments of the authorities have created problems in the country. Authorities should not prevent people from criticism. People have the right to criticize, talk, and raise their voice. Officials should listen to them instead of suppressing them. Let the nation protest according to national laws and international customs,” he urged in the last Friday of 2022.

The top Sunni cleric of Iranian Balochistan stated: “Neither Baloch nor other ethnicities are separatists; rather they want dignity, justice and freedom and pursue their absolute rights.”

“Some have said that the critics are separatists. We are staunchly against separatism. If separatism is proposed in Iran, the first opponents are the Baluch, Kurd, Persian, Arab, Turkmen, Turk, Lor, Gilaki and other ethnic groups”, he noted.

The rights and dignity of women must be ensured
Insisting on respecting women’s rights, the Friday prayer leader of Sunnis in Zahedan said: “Just as seeking knowledge is vital for men, it is also necessary for women to get science and knowledge. It is a blunder that some people think that women are only obligated to raise children and take care of the house stuffs. They have lowered the status of women. Women can manage universities and fields just as they can be writers and scientists and benefit the world. God has given women talent. There must be grounds for women to equip themselves with science and education, and their due rights and dignity should be ensured.”

“Some asked the mother of Khodanour (who had martyred in the Bloody Friday of Zahedan) what her son had done that he has been so famous globally. She replied: Khodanour loved me a lot and used to kiss my hands and feet, and he wishes for martyrdom. This is the result of respecting mother. Women are respectful in the society. Many fathers, husbands, and children are ready to die, but the women are not hit, “said the president of Darululoom Zahedan.

Women have been isolated in Iran
Criticizing the authorities for detaining women protestors, the Iranian political leader said: “I am surprised that some women are arrested and taken to jail. If I were in power, I would release all the imprisoned women except those who committed dangerous crimes. The officials have made women by their acts to burn their headscarves. The harsh treatment of the moral police made women take off their headscarves and burn them. I believe that Iranian women are not against headscarf, but our attitude has caused them to show this reaction.”

“Women have been isolated in Iran and their rights, which are equal to men, have not been respected. If Iranian women’s expenses were covered, and they enjoyed their due rights and status, they would follow your commands themselves and there would be no need for moral police, “Shaikh Abdol-Hamid believed.

I seek neither power nor fame
The Iranian top Sunni scholar went on to continue his Friday speech of Zahedan, saying: “What I am talking about is only to fulfill my mission. As a well-wisher to the state and the nation, I highlight these issues and criticize. I have no any personal interest. I seek neither power nor fame. We had supported the Islamic Republic and had always been present in elections and other national occasions. Officials know well that I have not asked anything from the state.”

“I prefer my simple life to the kingdom and the highest state degrees. I want the same for all scholars and Ulama. I believe that the clerics should return to their main duty. I don’t believe that scholars should be at the top of affairs ruling on people, rather public’s affairs should be divided based on abilities and qualifications; the abilities of clerics are something else,” he added more.

Mawlana Abdol-Hamid expressed his sympathy with people of Iran and said: “I wish two things for the Iranian people; first, the prosperity of people’s lives in this world, freedom and justice for them, and secondly, their prosperity in the hereafter life. In this world, freedom and justice, honor and dignity are the right of the Iranian people, just as the pleasure of Allah should be obtained for the prosperity of their hereafter life.”

He urged: “The states should not see only their power of forcing with closed eyes; rather they must consider what others say about them.”

Solution of economic problems is in politics
“Our economy depends on our political steps. If our political problems are solved, the economy of our country will grow up. If I had the power, I did not even put a single political prisoner in jail, but I would free all. Give me a chance for one day; I will release all political prisoners. Than see the next day that how much this effects on economy,” said Imam of the Grand Makki Mosque of Zahedan.

The presidents of Darululoom Zahedan criticized sever pressures on people of various strata and said: “The holy Prophet, peace be upon him, said: ‘He is not one of us who is not merciful to our youngsters and does not respect and honor our elders.’ We hear that young boys and teenagers are detained in Iran. Do not prison them. Sometimes hard sentences are issued against children. While if they commit a crime and even commit a murder, they should not be retaliated. How many children have been killed amid nationwide demonstrations? This is very painful. There is no good in a religion that does not have mercy.”

He further said: “Do not arrest and summon the scholars, rather talk to them and solve your issues with them by negotiation. Allah will not have mercy on those who are not merciful to His servants, and are brutal. There must be grounds to criticize; otherwise the tyranny will spread in the society. This is in your favor to listen to critics and to tolerate them. We have to see our weaknesses and correct them and get along with people. I have weaknesses and scholars, rulers, and all have weaknesses.”

Shaikh Abdol-Hamid referred to the ban of the wife and daughter of Ali Daei, a popular Iranian athlete, from going abroad, and said: “The Ali Daei’s family, one of the elites of the country and a national champion, has been returned; they were on a flight from Tehran to Dubai when they ordered off. It was hard for all of us. What are you doing with her daughter and wife? All governments in the world should have a wide view. If the view is tight, the problem will be solved.”

There is no representative of Islam
The Iranian Sunni leader asked the people of Iran not to hate the religion if scholars made mistakes or committed sins. He said: “Do not escape from the religion if scholars make mistakes or commit any sin. If you see any weakness in me, do not attribute it to Islam; distinguish between the actions of scholars and the religion of Islam. If you want to follow the religion of Islam, look at the life of the holy Prophet Muhammad and the Companions and his households. Do not hate Islam if the performance of people and authorities is bad. You will never find a better religion than the religion of Islam. I have received reports that some has taken the copies of the holy Qur’an from their homes to the mosque. Do not cut your ties with the Almighty Allah in any situation.”

“None of us represents the religion; do not compare our performance with religion. Communicate with Almighty Allah. I would like to advise not to cut your relationship with Him. Just as you scream Allah, He will descend His blessings on you. The problems of the people of Iran will be solved as quickly as they call Allah Almighty, “Shaikh Abdol-Hamid inspired the people of Iran.

Iranians want nothing but justice and freedom
Complaining about the discrimination against all Iranian people, the most influential Iranian Sunni leader stated: “The Iranian people want nothing but justice and freedom. They made a revolution for this purpose, and this is the right of all humans on the earth. There should be no difference in rights between men and women. According to the constitution, there should be no discrimination among Iranian ethnicities, but today all Iranians are complaining about discrimination. When I complained to someone of discrimination, he said that Shiites are also complaining; I said that they have the right to complain. They have also acquired knowledge and specialization, but in the selections, only those who took part in national and religious ceremonies and marches are accepted. This has created such a situation in the country.”

“We must respect human rights. According to our belief, non-Muslims have human rights. We believe that Baha’is have human and citizenship rights; they cannot be considered “Mortad” because of the tenets they inherited from their forefathers. If someone does not accept God, s\he should not be deprived of human rights,” said the Iranian top Sunni cleric of Zahedan.

We wish Iran’s human resources to return to their homeland
Regarding the escape of human resources from Iran and Afghanistan, Shaikh Abdol-Hamid stated: “We have seen that the rights of many Iranians have been lost, and people from particular sides run the country. We hope that educated men and women and all Iranian elites who build other countries return to Iran and build this country. They are our national capitals.”

“In Afghanistan, I believe that everyone who has left that country should return. We should be kind to everyone. Governments should be a mercy to their people. Narrow-views should not be practiced in countries; this is the pride of governments.”

At the end of his Friday speech of Zahedan, Shaikh Abdol-Hamid inspired Sunni women to attend in the Friday prayers of Zahedan as they have participated in the past.
He stated that we are not against participation of women in social and religious fields as some pretend.