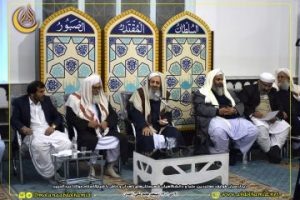 In a meeting with Ulama, tribal elders and academics of Khash and Zahedan, the most influential Iranian Sunni leader stated that instead of begging officials to release our young people from prison, we ask them why you detained them. He complained that Sunnis of Iran have been suffering from discrimination, injustice, inequality and the lack of freedom for more than 43 years.

The conference was held in Zahedan’s Grand Makki Mosque on Wednesday, June 11, 2023.
Some of the attendees discussed the current crisis in Iran, especially the Bloody Friday incidents of Zahedan and Khash and strongly reacted to the blasphemous words of Javad Larijani against the Grand Makki Mosque.

“Discrimination is the biggest problem that we, the people of Iran, suffer from for 43 years. Discrimination created the bloody Friday incidents in Zahedan and Khash that hundreds of innocent worshippers including children and women killed and wounded. Discrimination causes isolation and deprivation,” the president of Darululoom Zahedan pointed to the bad consequences of discrimination and fanaticism in Iran.

The Iranian top Sunni cleric insisted on solving the problems by taking wise measures, saying: “Depriving Sunnis of the country’s administrative posts is the result of fanaticism. We have been emphasizing the need to solve problems through debate and emphasize the authorities to sit with protesters and hear their voices instead of suppressing them. Those who have capacities should take steps towards solving problems.”

The Friday prayer leader of Sunnis in Zahedan replied to someone who asked if he had sent a delegation to Tehran to negotiate with the authorities regarding the Bloody Friday incidents of Zahedan and Khash, saying: “We did not have a negotiation team in recent issues. Only some went to Tehran to hire lawyers; unfortunately, three of Tehrani lawyers were arrested when they were on the way to Zahedan in Tehran airport. The Bloody Friday incident was a great oppression. We are demanding the rights of the families of the martyrs and the wounded people. They will not be satisfied with blood money and even with the imprisonment of the perpetrators, but they demand fair and just treatment.”

He urged that negotiation would be only with the authorized high officials who can solve the problems.
“The authorities and the judiciary officials must respond to the families of the martyrs,” Shaikh Abdol-Hamid underlined.

The Iranian Baloch political leader further said: “We participated in the presidential elections, but after they did not answer to our demands after the elections. Unwritten policies have been applying in Iran against Sunnis for decades. We have been working to get our due rights and have been emphasizing the officials to appoint Sunnis in key posts, but they have not been appointing our people in administrative jobs except few people in lower posts.”

Mawlana Abdol-Hamid pointed to the recent arrests in Balochistan especially those who are at risk of execution and said: “I do not agree that we should beg some officials to free our prisoners, but we have to question the authorities why they have put our people to prison? Most of these people are innocents and should be free soon.”

Regarding issuing death penalties against Baloch people, the Iranian Sunni leader said: “I believe we should not beseech the authorities to forgive our people, but we say that when our people did not commit murder, why they are sentenced to death. Those who throw stones and commit mistakes must not be hanged. We defend the rights of prisoners and those who are sentenced to death.”

He said that for getting due rights we have to pay the expenses and endure difficulties in this way.
Imam of the Grand Makki Mosque of Zahedan said: “We believe that these young people should not be arrested. We have always emphasized on honesty, justice and maintaining security. We follow up our problems through legal means.”

“Someone who had blasphemed the Grand Makki Mosque of Zahedan, if he came to me and objected me on my views and remarks I would listen to him,” said Shaikh Abdol-Hamid, pointing to the blasphemous words of Javad Larijani against the Makki Grand Mosque.

At the end of the meeting, the Baloch activists issued a statement and criticized the officials over ignoring the punishment of the forces and authorities who killed about one hundred innocent citizens in Zahedan and Khash. They urged on officials to stop hanging the young, and tolerate peaceful protests.