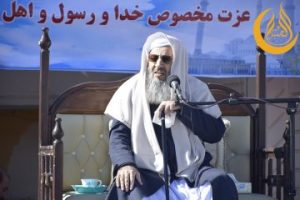 Shaikh Abdol-Hamid called on the Iranian officials to talk with opponents instead of suppressing them, believing that the country’s problems will not be resolved with eulogists and preachers, rather the negotiation of elites and politicians with the opponents and critics is the way to get rid of the current crisis.

He was talking to the people of Zahedan, capital of Iranian Balochistan before the Friday prayers on June 13, 2023.

Repression and execution are not the solution
The most influential Iranian Sunni leader said in his Friday sermons of Zahedan: “A ruler should always be awake, see everyone, and pay attention to the demands of different strata of people. The ruler should not look at only one particular group or class. It is important that the ruler should not allow oppression and injustice against anyone, because the responsibility of being a leader is a blessing and a test from Allah Almighty.”

“On the Day of Judgment, Allah will raise the ranks of the just ruler whose heart beats for the people, and He gives them the best reward. Just as Allah rewards a just ruler, He also deals with an unjust ruler,” said the president of Darululoom Zahedan.

The eminent Iranian political Sunni leader raised his voice amid anti-government nationwide demonstrations, saying: “Today, as popular protests spread all over the country, anxiety, and stress have made people restless. The people of Iran suffer from poverty and hunger, and the national currency has fallen. People want freedom; they protest and criticize, because of these problems. All walks of people including writers, journalists, politicians, women and young people have problems. It is a fact that the country is suffering from division. We are among the people and see their problems. These problems cannot be denied. The problems are not only economic.”

Insisting on equal treatments with all Iranians, Shaikh Abdol-Hamid clarified that there are solutions to the problems, saying: “The solution is only dialogue and negotiation, not suppression, imprisonment and execution. We are all Iranians and the protesters are our people. Our new generation has graduated from these universities and has got education from the schools of the country. Iran is a country that has diversities; few countries have such diversities. We emphasize that all Iranians should have equal rights and opportunities.”

The Iranian top Sunni cleric further addressed the officials to negotiate with people by saying: “Elders and officials of the system! Sit with different classes: elites, academics, and intellectuals, critic politicians, opponents, scholars, women, youth, and listen to them. Eulogists and poets have another job; to resolve the problems, you need thinkers and masterminds. Negotiation is the solution to the country’s internal disputes. People want big changes in different fields. We should have a broad view. They are our own people, not foreigners, and their loss and benefit return to us.”

“Negotiate with people. I say frankly that the judiciary, security, and military officials cannot solve the problems. Rather, you must adopt the right policies. Sit with friends, critics, and opponents. Neither Friday imams nor Ulama can solve the problems with preaching, nor the problem can be solved with mobilization of eulogists; they have other jobs. There is the need of thinkers,” the Friday prayer leader of Sunnis in Zahedan underlined.

Imam of the Grand Makki Mosque of Zahedan expressed his viewpoints and said: “We are all one. We are well-wishers and compassionates, we want the honor and dignity of Iran, and think for all people. If we cannot do anything, at least we cry and pray for them. We do not think about creed or just Sunnis. We have a duty to show compassion for all humanity. This is the teaching of the holy Prophet, peace and blessings of Allah be upon him.”

Mawlana Abdol-Hamid continued: “As Muslims, we should have a strong connection with the Prophet Muhammad and Prophet Abraham, peace and blessings of Allah be upon them. All Iranians are from us. We have no strangers here. All are insiders, not outsiders. Every Iranian who is killed, imprisoned, or tortured is one of us. Take care of the young persons; their pride and self-esteem should not be broken. They are our sons and daughters.”

“All creations of Allah should be treated with compassion. We think about Iran’s peace. That is why we say that protests should be peacefully. Peaceful protest is legal and in accordance with the custom of international laws. I do not believe in beating and killing. I’d like to advise everyone to respect the security of the country. Killing and tying are prohibited. Officials and politicians should sit with the people and listen to them. We hope that the problems will be solved soon,” said the prominent Sunni scholar of Iran in a part of his Friday sermons of Zahedan.

We intentionally made the letters public, because authorities did not respond
The most outstanding Iranian Sunni leader continued his Friday speech of Zahedan, saying: “I have been talking and criticizing for thirty years. In the past, we used to speak more softly. Today, the situation is different, so we speak more frankly. The president and elders do not give us time to meet with them. If we do not speak from this platform, where can we speak from? One of the security officials told me to talk to him. I said you are a military person; we should talk to the politicians.”

“Someone criticized me, why do you make the letters (to the officials) public and broadcast them from the media? I said that I do this because the high-ranking officials do not respond to our letter, so we have to broadcast them. If the authorities solve the problems, there will be no need for us to raise these issues from this platform. We have a duty to be with people, live and die with them. We are well-wishers. The people to the negotiation should be the political authorities, not the military,” said the president of Darululoom Zahedan.

Those who call Makki ‘Zerar’ know what they are talking about
Referring to Mohammad Javad Larijani’s blasphemous words against the Grand Makki Mosque of Zahedan, the Iranian top Sunni leader said: “We were surprised how someone can claim to be a Muslim and call God’s house as Zerar Mosque. The mosque that the hypocrites built in Madinah and was an anti-Islam base, the holy Prophet, peace be upon him did not call it Zerar\harmful and even said that he would pray in that place when he returned from his trip. Allah revealed the verse that the mosque was built in opposition to Allah and His Messenger.”

He urged: “This mosque was not built at the expense of any nation or government, but it was built for the worship of Allah. I once said that Makki Mosque is connected to the Kaaba. The good of all people and humanity is thought and considered here. We never think about Shia or Sunni here, but about the Islamic world and Ummah. Humanity is considered here.”

He added more: “What will answer to Allah those who call a mosque built with piety as Zerar? We hope that those who speak know what they are talking about.”

Summoning Mawlana Gorgij to the court is not appropriate
Criticizing the judiciary authorities for summoning Mawlana Muhammad Hussein Gorgij, the Friday Imam of Azad Shahr\Golestan, to the special court for clerics, the Iranian Sunni leader said: “Mawlana Gorgij has many experiences in the field of interpretation of the holy Qur’an. Thousands of students have been receiving knowledge from him. He is one of the prominent and compassionate scholars of the country. He does not speak improperly. Many people in the world are encouraged because they criticize. He has been summoned to the special clerical court because he performed Friday prayers again after a year of suspension.”

“Such a treatment with prominent scholars is not appropriate. Debate is the solution to this problem; send scholars and politicians to negotiate with him,” he said more.

See issues with a broader vision
“We hope that the issues will be seen with a broader vision. All of us should have foresight. I would like to advise both the people and the media not to insult anyone. In the slogans, talk about freedom, justice, economy, and prosperity and do not insult personalities and elders. This is my opinion, not my policy. We can conquer the world with good behaviour and justice. We do not allow ourselves to hide the truth even as the size of a hair,” said Shaikh Abdol-Hamid in the last points of his Friday sermons in Zahedan.