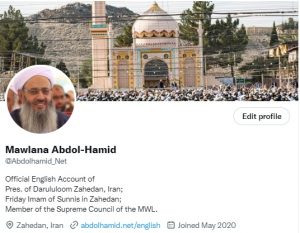 Who would have thought that in a country headed by Ulama and called “Islamic Republic”, instead of listening to the voice of the protesters, they will face murder, execution, rape and severe torture? What is the answer of the leaders and perpetrators of these crimes before God?

*Iranian people, inside and outside the country, have reached the conclusion that the current situation is unbearable and changes should be made. It is wise for the state to surrender before the will of the people to prevent more casualties and societal collapse.
Dec. 20, 2022

*Indiscriminate executions and repression have no result except Allah’s displeasure, public hatred, and igniting anger of the nation. The state should see the facts and listen to the cry of the people.
Dec. 13, 2022

*There are reports about sexual assault on female prisoners with the intention of humiliating, suppressing and forcing confessions have been reflected in the media, and the narratives of some prisoners confirm this. If proven, the biggest villainous on the earth are the perpetrators of these crimes. It is necessary for the judiciary to prosecute these people and punish them severely.
Dec. 06, 2022

*The volunteer security guards of the mosque identified and captured some infiltrating forces among the Sunni protesters on Dec. 2, 2022. The men were smashing shops and public assets. A flag of the separatists was shown during the sermon, but immediately was lowered.
Dec. 04, 2022