Since the Revolution, We Suffer from Discrimination 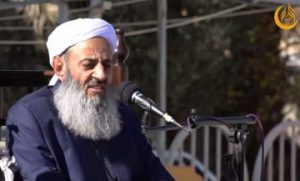 Calling on the people of Iran on maintaining the national solidarity, the most influential Iranian Sunni leader insisted that all Iranians should benefit from national interests equally.

Talking to more than one hundred thousand people in Zahedan’s Grand Musalla on Oct 28, 2022, Shaikh Abdol-Hamid went on to describe the concept of social awakening and stated that the social awakening means recognizing the responsibilities we have, both in religious and social affairs. We must respect the rights of others and claim our rights too. As ruler has a right on masses, he also must respect the rights of the people.”

No government in the world should discriminate among people
“Discrimination is rejected in all international laws. Different classes of people, including ethnic and religious communities are citizens. Islam never allows making difference among citizens and people,” said the Friday prayer leader of Sunnis in Zahedan.

He continued: “When the holy Prophet, peace and blessings of Allah be upon him, formed a government in Medina, there was no discrmination among the tribes and ethnicities. Even the Persian Salman, may Allah be pleased with him, who had come from Iran and had no kinship in Medina, was called a member of the households of the holy prophet PBUH. Bilal, may Allah be pleased with him, who was a slave from Habesha, and Abu Bakr released him, got a special position among Muslims.”

“The holy Prophet, peace be upon him, never had two consecutive days of food. He never collected any wealth and stated: whatever I leave after my passing, it belongs to the public,” he said.

Shaikh Abdol-Hamid referred to the current events in the country and urged on fairness and equality, saying: “Unfortunately, the holy Prophet’s Seerah has been ignored today; that’s why inflammation has been spread. All Iranians are our brothers regardless of their race, creed, or orientation. All have equal rights and opportunities. All Iranians, including Jews, Christians, Dervishes, and so on, are living in our country have fraternity with us. The people of the world are our brothers in humanity. We are with all human beings in national interests and give them priority.”

“I have always told the authorities that all Iranians have commonalities in national interests. We advise the oppressors, but do not support them. We do not support Russian oppression on Ukrainian people and oppression on Palestine Muslims,” said the eminent Iranian Sunni scholar in his Friday sermons of Zahedan.

Unilateral ruling is a weakness in country’s administration
Shaikh Abdol-Hamid insisted on fulfilling religious and ethnic demands of Iranians and said: “Iran is composed of different ethnicities and religious communities; all should have equal rights. No one should interfere in the affairs of others. Unfortunately, Iran has been struggling with religious and ethnic discrimination since the revolution. As national demands are the demands for all Iranians, we also insist on ethnic and religious demands. This is our legal right. We do not go beyond the truth and fairness and beyond our rights. We must be fair and just and always consider Almighty Allah.”

“We demand our national rights and insist on freedom of expression and on political freedoms. Iran’s problems are not only economic and livelihoods. Freedom is our most important demand. There is no pluralism in Iran. The development of the country is not possible without pluralism. I believe that the current weakness in the management of the country is due to unilateral ruling of one particular party. As a benevolent, I would like to say: hear the voice of the people and fulfill their demands,” president of Darululoom Zahedan said.

“We have complaints about the officials who did not offer condolences to us in Zahedan’s incident and they offered their condolences to the people of Shiraz,” Mawlana Abdol-Hamid complained.

Referring to the issuance of the new statement of the provincial Security Council on Zahedan’s incident, the most outstanding Iranian Sunni leader said: “Recently, the provincial Security Council has issued a statement. There are some positive points in this statement, although it is still not convincing for us. The statement says that the people of Zahedan were killed unjustly and those who killed these people should be punished. This shows that the government acknowledges that people have been killed with no reason in Zahedan’s Musalla attack.”

“We emphasize on fairness. We hope that the authorities will continue and follow this case without any consideration,” he said.

The Friday Imam of Zahedan called for the formation of an “independent fair fact-finding committee” to examine the different aspects of the incident and prove the right of these innocent people.

Shaikh Abdol-Hamid urged on maintaining the national security and thanked all Baloch tribes and other Iranian communities who came to the Grand Makki Mosque of Zahedan and expressed their condolences, and declared their solidarity with him and with the people of Zahedan.

“I also appreciate those Iranians who expressed sympathy with us from abroad, and the media outlets that showed the true news of us,” he said.

Control your emotions
While supporting the peaceful rallies in Iran, Shaikh Abdol-Hamid forbade people from smashing and destroying public and private properties and said: “Public and private properties should not be destroyed in protests. The Sariah of Islam does not allow this. Peaceful rallies are rights of people. On the other side, the police officers must not shoot at people because both sides are Iranians.”