Hitting & Killing its Own People isn’t Suitable for a State 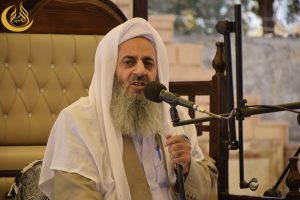 Referring to the increase of nationwide protests in Iran, while calling on the officials for adopting right policies in country’s foreign and domestic affairs, the most influential Iranian Sunni leader considered dissatisfaction of people as main causes of recent protests in the country.

He asked the authorities to see the people, listen to their voices, and fulfill their legitimate demands. Shaikh Abdol-Hamid strictly prohibited the government from killing and beating the people and called on for finding out right solutions.

He was talking to tens of thousands of worshipers before the Friday prayers in Zahedan’s biggest Friday gathering on Oct 14, 2022.

“In recent days, there has been instability in the country. The people of Iran have been protesting for more than twenty days. It should be clear that why people are protesting. Being realistic, we can find out that the domestic and foreign policies of the country are ineffective. Protests will continue and problems will increase as long as the country’s policies are ineffective,” said the eminent Iranian Sunni scholar in his Friday sermons of Zahedan.

Sigh of the oppressed destroys
Pointing out to the bloody Friday of Zahedan that left dozens killed and injured by Iranian security forces while people were protesting, Shaikh Abdol-Hamid noted: “Last Friday, there was a great injustice here. I am sure, and I swear that Allah was displeased with this injustice. We all were here and saw what happened. Killing innocent people has bad consequences in the sight of Almighty Allah. In this incident, I advised the people to be calm and avoid any kind of violence and tension; I thank them for accepting my appeal.”

“As a well-wisher, I will continue to tell the truth always and defend people’s rights. I say openly that these people were oppressed; Allah knows they were killed unjustly. We ask the authorities to investigate the matter carefully. People will not be satisfied until the officials condemn the massacre and the murderers of the people are convicted and punished,” said the Friday prayer leader of Sunnis in Zahedan.

He asked the people to announce the names of the dead and injured of the incident so that information that is more detailed could be provided in the legal complaint process.

He asked the Iranian media outlets to avoid broadcasting fake news, and to express the facts.

People are not slaves to bread and money
Shaikh Abdol-Hamid rejected limiting the protests just to economic issues and said: “It is true that the country has enemies who want to create distance between the nation and the government, but we should accept the fact that people have been struggling with so many problems that are not only economic. Those who pretend that the country has only economic problems are completely wrong. Economy is important, but recently the policy has based on considering all problems as economic; this is a big mistake. People are not slaves to bread and money; they want freedom and dignity and demand their rights.”

President of Darululoom Zahedan continued: “I am not saying that we do not have external problems, but I believe that internal problems are more serious. Some politicians have created filters between the system and the people; the filters that no one can enter the political system of the country but some people with particular backgrounds; this has increased the problems. If there were diversity in the parliament and in the system of the country, such problems would not arise today.”

I wish the officials could see the entire nation
“Our country has ethnic and religious diversity. People of different backgrounds live in Iran. Allah Almighty created diversity among people, and He likes it; we should accept this fact too. All religious and ethnic communities should be respected and must have equal opportunities in the country. The government must consider it and give all their rights and freedoms,” said the Iranian Sunnis’ leader in the Friday gathering of Zahedan.

“In our country, we have seen what happened to Dervishes. Even if the dervish’s tenets are wrong, they themselves have to answer to Almighty Allah. We should leave them to worship Allah on their own way,” Shaikh Abdol-Hamid added more.

“Freedom must not be taken away from anyone, and those who tell the facts must not be threatened. Let different tendencies and groups speak,” he underlined.

Imam of the Grand Makki Mosque of Zahedan went on to say: “Sympathizers and well-wishers have been saying that Sunnis and other minorities have equal rights in the country. When the late president of Egypt, Muhammad Morsi won election, I wrote to him and told him to use Shiites, Christians and even secular people in his administration. In Afghanistan, I advised the Taliban to do the same. In our country, religious, and non-religious citizens, all are the children of Iran and have equal rights.”

“I wish our officials would listen to different parties and tendencies and see the entire nation. Protesters must be heard all across the country; this is vital and important,” said Mawlana Abdol-Hamid.

Those in power should hear the voice of the nation
The most outstanding Iranian Sunni Baloch leader criticized any violent behavior and harsh treatment against protesters and said: “I believe that the protesters should not be treated harshly and as enemies. No state should hit and kill its people because people support the government against foreign enemies. If you lose the nation, then who will support you? If I were in power, I would definitely get along with the people.”

In his last points, Shaikh Abdol-Hamid alluded to country’s protests especially to Zahedan’s incident, saying: “What happened in our country, we take it as a good omen; we ask Allah for help in this incident. Those who are in power should listen to the voice of the people and answer their demands.”

“Some of Zahedan’s detainees have been released; we hope that the rest of the detainees will be released soon. May Allah elevate the ranks of our martyrs, bring them together with the martyrs of the beginning of Islam, the martyrs of Ohod and the martyrs of Karbala, and heal the wounded,” he said.