Peaceful Rallies, Due Right of People 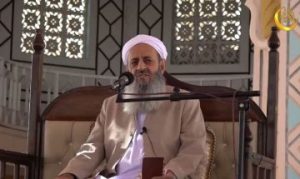 Referring to the increase of nationwide protests in Iran, the most influential Iranian Sunni leader considered holding peaceful rallies and protests the due right of the people of Iran. He advised the protesters to avoid destroying people’s property and insulting personalities. He also asked the authorities to interact with people and tolerate them.

Talking to the people of Zahedan in the presence of tens of thousands of worshippers before the Friday prayers on Sep 30, 2022, Shaikh Abdol-Hamid said: “As a benevolent citizen to the people and to the officials, I have been emphasizing on fundamental changes in domestic and foreign policies in the country; I think this is a basic need. However, I don’t have any state responsibility, but as a citizen I am in such a position to give suggestions to the authorities. We are among the people, and we know people’s problems and demands well.”

“I have been speaking within the framework of the law and I have already said that there must be fundamental changes in the country: first, in our foreign policy, we need de-escalation. We must have good relations with the world. Secondly: our officials should pay more attention to the country’s internal affairs”, said the Friday prayer leader of Sunnis in Zahedan.

“Unfortunately, life became difficult in a country that has the biggest potential, talent, capital, and facilities,” he complained.

Emphasizing on the need of implementing the constitution and on ensuring the legitimacy of religious freedoms and legal rights, the prominent Iranian Sunni leader stated: “National unity and security will maintain when people have freedom and their voices are heard without any regard to their faith, creed, orientation, and tendency. Both, during the era of the reformists and the era of the fundamentalists, we have raised the demands and expectations of our people. In order to achieve people’s satisfaction, these demands must be fulfilled. If the officials listened to us and to other experts and sympathizers, today the country would have no problems or there would be fewer problems and people would be satisfied.”

“People have been demanding their rights for so many years, and now they have come to the streets to protest for achieving their goals. Actually, they have the right to protest and raise their voices. Gatherings and protests must be peaceful. Public properties must not be damaged. No one should be offended, and the security should be maintained’, said the Friday Khateeb of Zahedan.

“People should be able to raise their demands and issues. In republic countries, people have the right to speak, criticize and raise their due rights. Different tendencies, political spectrums, religions, and ethnic groups should have freedom and equal rights and opportunities. This boosts our unity, maintains our security, and strengthens national solidarity. Unity is not achieved only by words, but by seeing people and hearing their voices,” the Iranian Sunnis’ leader believed.

“I would like to advise judicial officials and other relevant authorities to tolerate the protesters and show patience to them. Officials should not deal with people harshly, but interact with them; this benefits all,” said president of Darululoom Zahedan.

Shaikh Abdol-Hamid questioned: “Why these elites could not stay in Iran? Is it due to the fall of the value of our currency, or because they feel that they have no freedom?”

“If we want our nation to stay with us, we must pay attention to their demands and listen to them. As the Prophet Muhammad, peace and blessings of Allah be upon him, used to hear to the people; as Caliph Ali, May Allah be pleased with him, said: If it was not important for me to take the rights of the oppressed from the oppressor, I would not have accepted the caliphate. Therefore, the value of any state depends on serving people and winning their hearts”, the most outstanding Iranian Sunni scholar further noted.

He urged: “Officials should be humble before the masses and serve the nation, respect their demands, and fulfil their expectations. This will cause the pleasure of Almighty Allah and the people’s satisfaction.”

Scarf is an Iranian and Islamic culture
Mawlana Abdol-Hamid continued his Friday speech of Zahedan, saying: “Recently, some women protesters cut their hair and set fire to burn their scarves.”

“I would like to advise the Iranian women, both Muslim and non-Muslims, that veils and headscarves are parts of the culture and dress of the people of the Orient and this dress is respected. If someone is angry and does not wear a scarf, she should not burn it in the fire,” he noted.

“In addition to the fact that scarves and veils are Iranian culture, they are also Islamic culture. Non-Muslims must respect Muslim culture,” Shaikh Abdol-Hamid underlined.

Officials must deal with the recent issue of Chabahar justly
Regarding the accused rape of a police officer with a 15-year-old Baloch girl in Chabahar in recent days, Shaikh Abdol-Hamid said: “It is hard for us to say the word rape, but anyway this issue has been raised, the public wants the authorities to deal with this issue in an extraordinary way. The judicial system and the relevant authorities should handle the matter impartially and justly so that the truth is revealed, even if it is against anyone.”

Shaikh Abdol-Hamid called on the people to be calm down until the truth is revealed, saying: “I expect our dear people to keep calm and give the judiciary a chance to announce the result.”

Referring to the passing of Dr. Yusuf Qardawi, may Allah have mercy on him, one of the prominent scholars of the Islamic world, the most influential Iranian Sunni leader said: “In recent days, one of the prominent scholars and world personalities passed away. He had sufficient knowledge in the field of the Qur’an, hadith and jurisprudence and was aware of world crisis. In many issues, his views and ideas were in accordance with the needs of the Islamic world and conditions of the present age.”