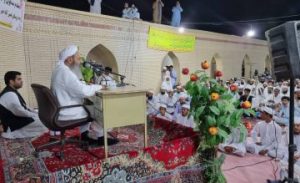 Religious freedom and elimination of discrimination in granting key positions are two long-standing demands and concerns of the Iranian Sunnis that have been remained unfulfilled since the beginning of the Islamic revolution of Iran, said Shaikh Abdol-Hamid in a graduation ceremony held in Iranian Balochistan on Sunday 21st Aug. 2022.

In a meeting with the people of Nasir Abad/Sarbaz, the most influential Iranian Sunni leader called on the Iranian authorities to fulfill these two demands.

He asked the Iranian authorities to deal with the discriminators and narrow-minded people who deny respecting Sunnis’ equal and legal rights.

In his remarks in Sarbaz, the president of Darululoom Zahedan objected the illegal pressures of some “fanatic and narrow-minded officials” who have been making efforts to restrict the religious freedom of the Sunni community in the cities and towns where they are in minority all over the country.

He stated that Sunnis have been facing barriers in religious matters in many cities of Iran, obstacles that prevent them from holding Friday and Eid prayers and the daily regular prayers in prayer houses.

The Friday prayer leader of Sunnis in Zahedan warned the authorities to deal with radical and narrow-minded elements who prevent Sunnis from performing congregational prayers.

The Iranian Sunnis’ leader called the role of the Iran’s Sunnis in maintain peace, ensuring security and participation in political and social arenas very active throughout the history of the Islamic Republic of Iran, stating that Sunnis have been defending the territorial integrity of the country with love and the sense of patriotism.

Shaikh Abdol-Hamid considered the positive role of Iranian Sunnis after escalation of sectarian violence in Iraq and Syria and said: “When the unstable conditions and sectarian conflicts spread in Iraq and Syria, some wanted to involve the Iranian Sunnis in these wars and bring it to Iran by the borders of our province, but with the efforts of Ulama, tribal elders, and Sunni thinkers, such conspiracies were thwarted in Balochistan.”

“Iranian Sunnis love their homeland and are proud of it, and always strive to defend it,” he believed.

The Iranian Sunni Baloch political leader stated that Sunnis have been participating in elections and paid cost in this regard. He considered the last presidential election in Iran, in which the Sunnis voted for Mr. Raisi, as an example of tolerance and patience in inequalities. He stated that Sunnis have tolerated all kinds of slander in that election, but they maintained unity.

“The Sunnis of Iran have expectations and demands from the president Raisi that must be met. Sunni citizens must be engaged in all official positions as Shiites, in the provincial capitals and in the capital of the country. We insist on fulfilling our aspirations and demand our rights through legitimate means. We are not disappointed yet; we have waited for so many years, and we will continue waiting until we meet our demands,” the most influential Iranian Sunni leader raised the demands of Iran’s Sunnis in a meeting with the people of southern Balochistan.

“When I traveled to Russia, we saw a beautiful mosque which is located three kilometers away from the Kremlin Palace. Ten thousand people attend in Friday prayer ceremonies in this mosque; this is one of the examples of tolerance. We are sorry for our officials when we see that Sunnis have been facing limitations and obstacles in prayer houses in the cities like Mashhad and Tehran,” said the Friday Khateeb of Zahedan.

He insisted: “The authorities must deal with such radical views and not allow any discriminative behavior with the Sunnis of Iran. They should not be deprived of their due rights.”

The Imam of the Grand Makki Mosque of Zahedan urged on religious freedom, on freedom of speech, and said: “Sunnis form a big population in the country; they are about 20 million in Iran. Like the rest of their compatriots, Sunnis have been working to serve their nation. They took significant steps towards unity and security that cannot be denied; therefore, they demand their rights and insist on it.”

Free Mawlana Kohi
The most outstanding Iranian Sunni leader demanded the release of Mawlana Fazlur-Rahman Kohi, an Iranian Baloch scholar who has been sentenced to prison due to his anti-government stances. Shaikh Kohi, the Friday prayer leader in Pashamag\Sarbaz, southern of Balochistan, is one of the Sunni civil activists who was sent to jail in Mashhad by the Special Court of Clerics in Nov. 2019.

“Mawlana Fazlur-Rahman Kohi is a pious man and one of the compassionate and useful scholars of the country. He has never committed any kind of corruption. Maybe some could not tolerate his criticisms and overt language,” said Shaikh Abdol-Hamid.

He said more: “We expect the officials of Rask and Sarbaz counties to take concrete actions in raising the issue of Mawlana Kohi’s release.”

Shaik Abdol-Hamid assured the Iranian authorities that Mawlana Kohi was a moderate scholar who moves in the direction of the scholars of the region.

“The release of Mawlana Kohi is in the interest of unity, brotherhood, and security of the region,” he insisted.