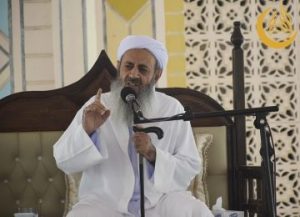 The most influential Iranian Sunni leader alluded to the causes of calamities and climate changes in the world believing that all kinds of pests and disasters on the earth were due to humans’ deeds and actions. Shaikh Abdol-Hamid emphasized on repentance, seeking forgiveness and reforming the society and individuals in the face of such climatic disasters.

Talking to tens of thousands of worshipers in Zahedan’s Grand Musalla on July 22, 2022, he began his Friday speech by recitation of the verse 41 of Ar-Rum chapter: “Evil has become rife on the land and at sea because of men’s deeds; this in order that He may cause them to have a taste of some of their deeds; perhaps they will turn back (from evil)” and said: “Sin, disobedience, rebellions and evil actions of human beings affect the nature and these are the causes of natural disaster in the earth. The above-mentioned Qur’anic verse proves that the calamities of the world are the fruits of mankind’s actions.”

The Friday prayer leader of Sunnis in Zahedan inspired people of different classes and said: “As human beings, we all have a duty to obey Allah’s commands, avoid evil deeds, work together, and cooperate with each other to build a better and more prosperous society.”

“Unfortunately, today mankind disobeys Allah’s commandments. People have deviated from the path of nature and rationality and got involved in corruption and negligence. Bloodshed, conflict, and war with destructive weapons have destroyed the earth; children, old men, women and defenseless people have been being killed in the world; such actions are disgusting and shameful,” said the most outstanding Iranian Sunni scholar in his Friday sermons of Zahedan.

Shaikh Abdol-Hamid added: “The nature of the world has changed today; global warming and climate change have become dangerous. Forests catch fire, villages are being destroyed, and people die of heat in the regions with temperate weather. Heat, dust, drought, earthquakes and etc. are punishments from Allah Almighty.”

“Why do people neglect God’s commands? Why don’t scholars of different sects and experts warn that it is Allah Who manages the whole world, brings famine, sends blessings, and heals the sick? Why people don’t understand the language of prophets? Why don’t Muslims bring the Qur’an and the Prophet’s teachings into their lives? Why mankind destroys the earth with sin and disobedience?” the prominent Iranian Sunni religious expert asked.

The Friday Khateeb of Zahedan continued: “Can human beings stop climate change? Can governments stop the dust? Coronavirus and disasters taught us that the management of the world is in the hands of Allah Almighty. Therefore, we should all meditate about our actions.”

Shaik Abdol-Hamid pointed out to the causes of climate changes and insisted on avoiding sins and respecting the human rights, saying: “Thief, usury, drinking alcohol, murder, and corruption must be eradicated. The rights of weak people such as orphans, women and so on, should not be lost. In some countries, the law supports homosexuality; such corruptions must be stopped.”

“All believe that there should not be absolute freedom in the world that does not observe the dignity and respect of the people and is against the logic and nature. When human beings move against the logic and nature, disasters and corruption spread and the world becomes unsafe,” the Iranian Sunnis’ leader said while criticizing the governments which support homosexuality law.

In his last points, Imam of the Grand Makki Mosque of Zahedan urged on building the society and working together, saying: “Scholars, intellectuals and wise people, both men and women, must stand against corruption and disobedience and forbid the people from sins and misdeeds.”

“In order to reform the society, we should take serious steps and guide people to the instructions of Allah Almighty and His messenger, which is the path of wisdom, logic, and the right path,” he underlined.