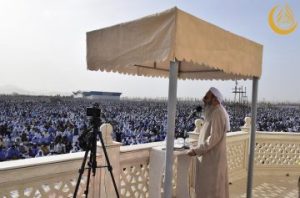 After the failure of the latest nuclear negotiations in Doha/Qatar, the most influential Iranian Sunni leader considered the current situation as the best opportunity for Iranians to ink a nuclear agreement with the world powers. He emphasized that all Iranians should enjoy the benefits of the nuclear deal.

Shaikh Abdol-Hamid was talking to more than two hundred thousand people before the Eid al-Adha prayers in Zahedan, capital of Iranian Balochistan on July 10, 2022.

The Friday prayer leader of Sunnis in Zahedan stated: “The world powers have made the situation in Iran very difficult through severe sanctions. Today, the Iranian nation is under severe economic pressure. The Islamic Republic of Iran has everything from the nation; therefore, this nation deserves good attention by the authorities.”

“Unfortunately, Iran’s currency has fallen in the world and the situation of economy has become critical. In order to lift the sanctions, the authorities should take serious steps towards economic development”, said president of Darululoom Zahedan.

Emphasizing on the importance of taking lessons from the prophet’s Seerah in dealing with others, Shaikh Abdol-Hamid stated: “In order to deal with others, we must leave some of our demands and follow the methods of the prophet Muhammad, peace and blessings of Allah be upon him.”

“In the treaty of Hudaybiyyah, the Prophet accepted the enemy’s conditions and made a compromise; this agreement was ultimately in favor of Islam and Muslims. Today, the nuclear agreement will be in our favor; the sanctions will be lifted and the value of our currency will increase. Billions of dollars of our frozen assets will be freed and we can sell our oil at the real price, which is also a high price”, said the prominent Sunni scholar of Iran.

Tension in the region is in favor of the enemies
Shaikh-ul-Islam Mawlana Abdol-Hamid called the nuclear agreement in interest of the Iranian people and to the detriment of Israel and the enemies of Iranians.

He said: “De-escalation of tensions in the region is very vital; unfortunately the tensions have ended in the favor of Israel and the enemies. The enemies have brought many of our neighbors closer to themselves.”

The Iranian Sunnis’ leader further said: “In the current situation, we have to change the economic situation of the country through diplomatic means and negotiations. Negotiations are in our interest.”

“The people of Iran rose up against the tyranny and torn apart the former regime. We must listen to the people and talk to the opponents and protesters,” he noted.

Shaikh Abdol-Hamid called the current situation as a golden opportunity for a nuclear agreement and for solving problems and warned: “If we do not reach an agreement, the enemy may make excuses and there is no any guarantee to have such an opportunity for negotiations again.”

The armed forces should not seize people’s lands
Referring to the housing problems of masses, suburb settlement and rising prices, Shaikh Abdol-Hamid said: “Suburb settlement has increased in the Sistan-Baluchistan province, especially in the city of Zahedan and Chabahar. House rent has gone up. In this situation, people cannot afford to pay high rent.”

Expressing his concerns about the seizure of people’s lands and their real estates by the armed forces and some government organs, the most outstanding Iranian Sunni leader said: “The lands of people have been seized by the government organs. People lived in these lands before the Islamic Republic of Iran. The armed forces should not cause dissatisfaction of the people. Officials should satisfy the people, they should not increase people’s housing problem, but solve this problem as soon as possible.”

“People are not satisfied that Zahedan’s lands are sold and the money is poured into the government treasury. These funds should be spent in the city itself. Officials should plan so that these funds are spent on the construction and development of Zahedan,” he added more.

People should have freedom
Imam of the Grand Makki Mosque of Zahedan called different ethnicities and religious sects to maintain brotherhood and fraternity and avoid prejudices.

Shaikh Abdol-Hamid advised the authorities not to differentiate among Iranian ethnicities and religious communities and continued: “We are all Iranians and have equal rights. If we raise some issues, we consider it our right as Iranian citizens.”

“People’s freedom, including religious freedom, freedom of speech and etc. must be ensured “, he said in his last points.