Use High Capacities of Islam, Ensure Women’s Due Rights 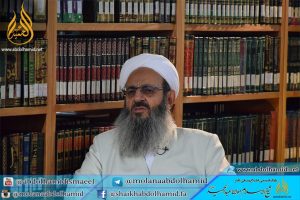 Ten months after the end of the 20-year occupation of the United States and western powers in Afghanistan, a new system called the Islamic Emirate of Afghanistan has come to power in this country.

Although this Islamic system has been able to establish a stable security in this country in an unprecedented level, but there are still many unsolved problems and challenges, including the issue of recognition of the Taliban government by other countries that need to be solved as soon as possible.

In an interview with Shaikh Abdol-Hamid, in June 2022, about the current crisis and challenges in Afghanistan, the Iranian Sunnis’ leader offered appropriate solutions and suggestions to the Afghan government in the light of the Qur’an and Sunnah. He insisted on ensuring the rights of women, opening schools and colleges for women and avoiding from imposing any special uniform and dress for them.

In this interview, the Friday prayer leader of Sunnis in Zahedan said: “Using high capacities of Islam in running a country’s affairs makes free and realistic people to accept the Islamic system with enthusiasm.”

President of Darululoom Zahedan continued: “Islam has high capacities and broad grounds in different arenas, in dealing with others, in tolerating the opponents, in women’s issues and so on; if the potential of Islam is used properly, this religion can guide and lead the entire world. If we want to present Islam to the world in the present age, we must consider all conditions of the modern age. We should implement justice and the teachings of Islam in such a way that the free and realistic people accept them and the impact of Islamic verdicts will appear for the people of the world.”

The eminent Sunni scholar of Iran called for the elimination of ethnic and religious prejudices in implementation of Islamic justice, and said: “We must be adhering to the principles of Islam, have a broad vision, tolerate others who do not think like us, respect the rights of different tendencies, ethnicities, and religions and confront violent extremism.”

The best rulers endure hunger and hardship but provide welfare for their nations
Emphasizing the reliance on two basic pivots, Allah and the people, the prominent Iranian Sunni leader said: “Piety and respecting the rights of the people are two basic axes and the key to success in any system and government. The best policy is to obtain the pleasure of Allah and consider the interests of the people. The best government is a government that provides peace and security for its people.”

“The best officials are those who bear hunger to feed their people and endure hardships for the comfort, welfare and security of their nations; such officials are the true representatives of Islam and the true followers of the Prophet Muhammad, peace and blessings of Allah be upon him”, said Shaikh Abdol-Hamid.

“Officials of any government should be humble by the task, respect the position of people, and listen to them carefully, just as the Holy Prophet PBUH listened to everyone to the extent that the hypocrites told: he is an ear; he listens to everyone. Allah Almighty replied that the Prophet is the best listener,” said Imam of the Grand Makki mosque of Zahedan.

He believed: “When a ruler is completely listening to the people, this is in the interest of the nation and is in accordance with the Seerah of the Holy prophet PBUH.”

Fatwas can be changed in time and condition, in all Islamic schools of thought
Regarding the drafting of a new constitution in Afghanistan by the Taliban government, the prominent Sunni leader of Iranian Balochistan said: “In Islam, some rules were revealed all at once and some revealed gradually. The laws that the Shari’ah has explicitly stated, no one can change them, but the laws about which the Shari’a was silent, the jurists make opinions on those subjects with their ijtihad in the light of the Qur’an and Sunnah. In ijtihad matters, Allah Almighty wants to make the human intellect active and He considers the conditions of the time too.”

“When the situation is different, the fatwa is also different. According to all Islamic schools of thought, fatwas can be changed according to the conditions of any time and place,” the Friday prayer leader of Sunnis in Zahedan expressed his opinions.

Considering the current situation of the world, Shaikh Abdol-Hamid insisted on issuing fatwas by using capacities of Islam in all state affairs including in political and religious matters.

Describing the enforcement of law gradually, as one of the most important teachings of Islam, the eminent Iranian Sunni scholar pointed out: “In a country like Afghanistan which has been occupied by non-Muslims, laws should be implemented gradually, because the people of this country have been alien to Islamic rules, so the implementation of Islamic rules at once is beyond their capacity”.

“The people of our time are suffering from ignorance more than the people of the beginning of Islam. Therefore, we should not put pressure on people. We have to implement the laws in such a way that the people can tolerate and bear them. We can implement some laws as rules and some through persuasion and encouragement in society, as Allah Almighty revealed the verdict of some laws gradually so that the people could follow them and would not be in pressure,” said president of Darululoom Zahedan.

“According to the opinion of the Hanafi jurists, women’s faces, hands, and feet are not part of the intimate parts which have to be covered, just as women are not obliged to cover these parts of their bodies while offering prayers. So follow the easiest fatwa on women’s hijab,” he further said.

The Friday Khateeb of Zahedan emphasized on the necessity of reopening of girls’ schools in Afghanistan and said that there were no restrictions on the education of women in Islam.

“I call on the Islamic Emirate of Afghanistan to hold conferences focusing on ‘human rights in Islam’ inviting Muslim scholars and thinkers to participate”, said Shaikh-ul-Islam Mawlana Abdol-Hamid.

“By holding such meetings and conferences, people will know that Islam has much in common with the world in terms of human rights; it also brings us closer to each other”, president of Darululoom Zahedan said.

“We must prove to the people of the world that Islam emphasizes on human rights more than other organizations and religions,” he underlined.

Consult with the scholars of the Islamic world in drafting laws
In enacting laws, Shaikh Abdol-Hamid said: “Managing the affairs of a country and leading a nation is different from managing a family, a seminary, or a university. Our dears in the Islamic Emirate of Afghanistan should consider the capability of the people in running the state affairs; because it is very important and vital to use different ethnicities, religions, and tendencies in country’s affairs.”

“In drafting laws, the leaders of the Islamic Emirate should consult with the scholars of the Islamic world, use their views and opinions, and choose the best viewpoints that brings mercy and security in the community and is more acceptable to the people,” said the most influential Iranian Sunni leader.

Afghanistan’s problems should be resolved through negotiation and dialogue
The prominent Sunni leader of Iran stressed on the need of solving Afghanistan’s problems through negotiation and debate, saying: “As a benefactor and as a compassionate, I would like to advise the officials of the Islamic Emirate of Afghanistan to use the high capacity of the Qur’an and the character of the Prophet, peace be upon him.”

“Listen to the domestic and foreign opponents and give them chances to talk; listen to them and address their legitimate demands,” president of Darululoom Zahedan addressed the Taliban officials and leaders.

He urged that Afghanistan’s opposite wings should resolve their issues through negotiation and dialogue, believing that debate was the best policy to solve the problems.

He concluded his points in the interviews and said: “Afghanistan has suffered from insecurity and imposed wars for decades. Afghan people can no longer tolerate the continuation of insecurity, war and civil strife.”