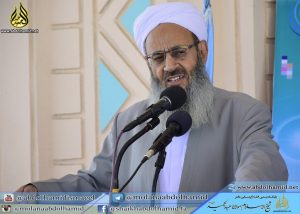 Following the insulting remarks against the Prophet Muhammad, peace and blessings of Allah be upon him, and Islam by some leaders and spokespersons of India’s ruling party (BJP), the most influential Iranian Sunni leader strongly condemned such blasphemous remarks, calling them contrary to the common sense and a tool of chaos in the world.

Talking to tens of thousands of people in Zahedan’s biggest Friday gathering on June 10, 2022, Shaikh Abdol-Hamid said: “In India, some high profile members of the ruling party, which is an extremist party, have insulted the Prophet Muhammad, peace and blessings of Allah be upon him. Muslims in India have been under pressures and they have been suffering from various problems in this country since this government and party came to power. India has been one of the democratic and good countries in the world. Its previous leaders were moderate, but unfortunately this extremist government has extremist leaders.”

“No common sense in the world allows blasphemy to any nation, sect, or religion. As Muslims, we must not insult the sanctities of any religion, sect, or community or offend any great personality. Even we are not allowed to insult idols,” said the Friday prayer leader of Sunnis in Zahedan.

“I wonder, despite the claims of civilization, why some people commit anti-civilization and anti-culture behavior in the globe and offend the sanctities of others,” he expressed his concerns.

President of Darululoom Zahedan continued: “We strongly condemn the insult to the Prophet Muhammad, peace be upon him, and expect the Indian leaders and its people to deal with the blasphemers”.

Concluding his points, the prominent Sunni scholar of Iran said: “Once, one of the British prime ministers said: Because there is freedom of speech in our country, we cannot deal with those who insult the sanctities of Muslims. I say that this is not freedom but corruption root of chaos; because blasphemy is not allowed in any community.”

“All people of the world must stand against such acts,” Shaikh Abdol-Hamid urged.