Shaikh Abdol-Hamid in the 43rd anniversary of 1979 revolution of Iran: 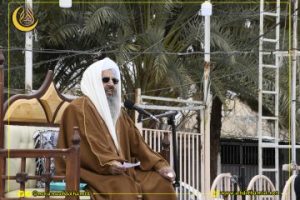 Referring to the occasion of the 22nd of Bahman, 11 February, the 43rd anniversary of the victory of the Islamic Revolution of Iran, the most influential Iranian Sunni leader called this revolution as the result of a popular uprising and stressed the need to spread justice and to satisfy the people in order to maintain the system.

Shaikh Abdol-Hamid was talking to the people of Zahedan, Iran, capital of Sistan-Balochistan in the biggest Friday ceremony of this city on February 11, 2022.

He said: “The people did not make the revolution by coup and military attack, but through rising and standing against tyranny, injustice, and cutely. Therefore, what keeps the country stable is making the people satisfied. Serving the people, satisfying them, and spreading justice strengthen the foundations of the system.”

The Friday prayer leader of Sunnis in Zahedan continued his speech by saying: “The use of force and strengthening of the armed forces cannot sustain the county. Rather, satisfying the people and answering their demands will stabilize the system. This does not mean that we should ignore strengthening the weapons needed for the national defense; it is a due right of every country.”

“Leaders and decision-makers should think about the people’s demands and investigate whether people are satisfied with them or not? Officials must find a way to bring people to the scene under one umbrella. The different ethnicities, sects and tendencies in Iran must achieve their due rights; no one’s right should be violated in the country,” said the president of Darululoom Zahedan.

“The Prophet Muhammad, peace and blessings of Allah be upon him, was the mercy of Allah for all the worlds. He was always careful not to oppress any non-Muslim living in the Muslim territory. In the last moments of his life, the Prophet commanded the guided caliphs that non-Muslims should not be oppressed, harassed and attacked by Muslims,” the eminent Sunni scholar of Iran addressed the Iranian officials during his Friday speech of Zahedan.

Shaikh Abdol-Hamid further insisted on imitating the method of the Households of the Prophet PBUH in running the state affairs, saying: “The Caliph Ali, may Allah bless him and grant him peace, was very strict in respecting the rights of non-Muslims. Once someone stole a Jewish woman’s property, Sayyidana Ali was so upset that he wished for death.”

“Justice, fairness and serving the people was the characteristic of the Households of the Prophet peace be upon them. I’d like to recommend the officials to use such capacities in running the affairs of the country”, said Imam of the Grand Makki Mosque of Zahedan.

There should be specific penalties for honor crimes
Referring to an ‘honor murder case’ in Ahwaz which shocked the society, the most outstanding Iranian Sunni leader said: “The news of the murder of a woman in Ahwaz related to honor issues was reflected in the world media. Analysts say hundreds of similar killings occur in Iran each year.”

The Friday Khateeb of Sunnis in Zahedan urged on enacting the penal code for honor crimes and said: “The main reason for honor crimes is that there are no specific laws in the country that set such crimes. Many people contact us and complain about couple’s infidelity, we cannot solve their problems because the state is required to criminalize such cases.”

“If there are reasonable laws in this regard, people will not commit murder and will hand over the criminals to the judicial authorities; when criminals are punished, people’s pain decreases”, said the Iranian Sunnis’ leader.

“I request, and also the request of the public is that the judiciary officials should take a specific position in cases of honor crimes and enact a penal code”, he concluded his points.