Shaikh Abdol-Hamid in the Friday gathering of Zahedan:

Resolving the Issue of Azadshahr, Demand of Sunnis and Freedom-lovers 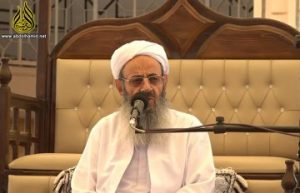 More than three weeks after removing the Friday Imam of Sunnis in Azadshahr, Golestan province, from his position and the endless concerns among the people, the most outstanding Iranian Sunni leader called on the officials to resolve this issue through wise measures as soon as possible. He considered solving this issue as demands of all Iranian Sunnis and free people.

Talking to the Friday worshipers of Zahedan on the last day of 2021, Shaikh Abdol-Hamid said: “The Sunni Community of Iran and all free people call on the authorities to resolve the issue of Azadshahr, and Mawlana Gorgij who have been serving the country as a sincere, benevolent, and compassionate scholar for decades.”

“Resolving this issue straightens the national unity and solidarity and disappoints our enemies and opponents. The enemies intend to misuse such issues as tools to create divisions and differences among Muslims,” said the president of Darululoom Zahedan in the biggest Friday gathering of Zahedan.

He added: ‘We hope that the authorities will resolve the issue soon by taking wise and effective measures’.

Muslims can be closer to Allah by imitating the character of the Prophet, his Companions, and Households
Expressing his concerns over the weakness of Muslims in practicing the Sharia’s commands, the Friday Khateeb of Zahedan said: “Unfortunately, Muslims are weak in Practicing their religion and faith and in fulfilling the divine commandments.”

“We claim to love God, the Prophet, the Companions, and the Ahlul-Bayt, but we are so weak in acting upon the rules of the Shari’ah and even in offering our prayers, which is the most important pillar of Islam. Throughout history, Muslims have not been so weak in carrying out the commands of Almighty Allah as they are today”, the most outstanding Iranian Sunni scholar expressed his regret over the bad condition of Muslims in the present age.

He inspired Muslims: “By imitating the characters and Seerah of the prophet Mohammad, peace be upon him, and through obeying God’s commands, we can be closer to God. First, we must strive hard to obtain Allah’s pleasure not to displease Him for any other benefit.”

“The pleasure of God is achieved through piety, honesty, trustworthiness, and by obeying the Shariah and the manners of the Prophet PBUH. God is our highest hope,” he believed.

Concluding his Friday speech of Zahedan, Shaikh-ul-Islam Mawlana Abdol-Hamid emphasized on the importance of repentance and on paying alms, saying: “Alms and charity have an important effect on the revelation of divine mercy. When repentance and charity are together, repentance is accepted sooner. Imam Abu Hanifa believed that praying for rain is the act of asking for forgiveness and repentance.”