Unity Achieved through Patience & Respecting Each other 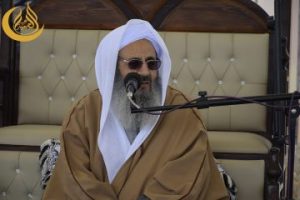 Inspiring Muslims to preserve their unity and fraternity, the most outstanding Iranian Sunni leader considered unity and security as main reasons for the development of each society. He counted division, conflict and war as causes of the collapse and fall of societies.
He was talking to the Friday worshipers in Zahedan’s Grand Musalla on Dec. 17, 2021.

The Friday prayer leader of Sunnis in Zahedan stated: “The unity of the Islamic Ummah is very important. We suggest everyone to maintain unity. Division, whether it is sectarian, ethnic, or religious, hit the community. Disputes cause economic, political, and social damage, and put society backward.”

“The division has created crisis and problems in Muslim community. War and bloodshed in Syria, Yemen, and Iraq are obvious examples of divisions in these countries. Some countries are fifty or a hundred years behind due to divisions and war. War tears countries apart. In war-torn countries, people die of starvation and cannot develop and build their countries,” said the president of Darululoom Zahedan.

“We call on all for unity and believe that the Muslim Community must be united. Unity will not be achieved without patience and tolerance. The Sunnis of Iran have tolerated many problems. They have endured blasphemous acts. Whenever we criticized against blasphemous behaviors and some apologized, we accepted their excuse. If some did not apologize; we endured them for the preservation of unity,” Said the Iranian Sunnis’ leader.

He went on to continue his Friday speech of Zahedan: “We just want to reform not to fight. Unity is a strategy in the system of our country. That is why the Supreme Leader of the Islamic Revolution of Iran always emphasizes on maintaining the unity.”

“Avoiding offensive behavior and tolerating each other is vital to maintain unity and fraternity and to live in peace and calm,” the most influential Iranian Sunni leader talked to the people of Zahedan on unity.

Urging that the Sunnis are the true followers of the Prophet’s family and children and they love them, Shaikh Abdol-Hamid said: “Sayyidah Fatima and the rest of Ahlulbayt of the Holy Prophet Muhammad PBUH are our role models. We have to imitate them and continue their way. It is not acceptable to use offensive words against religious figures. Using blasphemous words against the Islamic personalities especially on their anniversaries are not accepted. Such behaviors should be stopped.”

The prominent Iranian Sunni scholar said in this regard: “Mawlana Mohammad Hussein made a speech in the Friday prayer ceremony of Azadshahr, which caused some problems. I spoke to him and found that he did not imagine that some people would misunderstand his words.”

“As Shaikh Gorgij didn’t intend to insult, the case must be ended. Ending this issue is in the favor of the country and the people of Iran. I would like to ask the Shiite and Sunni scholars to put an end to this subject,” the Friday Imam of Zahedan underlined.

“Mawlana Mohammad Hussein is one of the most popular and prominent scholars of the country. If he has criticized someone, he has also defended the country and invited people of Iran to participate in the elections. He should not be reviewed only for his criticisms, but his support for the country should be considered too”, Shaikh Abdol-Hamid addressed the Iranian officials.

At the end of this part of his Friday speech of Zahedan, he said: “I would like to advise Shiite and Sunni scholars to respect the sanctities of each other. In the issue of the Households of the Holy Prophet, peace be upon him, there are a lot of commonalities between Shiites and Sunnis”.

“The Companions are among the most sacred people for the Sunnis; they served the prophet with sincerity. So avoid offensive remarks on them. Be alert and don’t provide opportunities for the enemies by being involved in blasphemous acts against each other,” he said.

Jama’at Tabligh is not harmful to anyone

The president of Darululoom Zahedan reacted to the “ban on the activities of the Jama’at-e-Tabligh” in some Muslims countries, saying: “Some criticized the Jamaat-e-Tabligh and advised them to” practice the Qur’an and Sunnah.” It is really surprising to make such a statement about a group that the whole world likes it, and it does not pursue any political or economic motives or material interests. Its members spend their own money and stay at mosques instead of staying in hotels. They work hard to purify themselves and others.”

“It is a group that tries to bring Muslims back to the prayer, Zakah, fasting, Hajj and all rules of Islam. It speaks of commonalities and avoids sectarianism. We are afraid that Allah will be displeased with these statements,” he added more.

Khateeb of Sunnis further said: “One of the important axes that Jama’at-e-Tabligh seeks is “practice of Sunnah” and “implementation of Islamic rules and the character of the Prophet” in life. Some just take the name of Qur’an and Sunnah, but these people really practice it. Jama’at-e-Tabligh has done no harm; it is only wishes good for the entire humanity. In any country, if this group operates, God willing, that country will be protected from many calamities. Wherever this is forbidden, we are afraid that God will send disasters there. So such decisions should be revised.”

Shaikh Abdol-Hamid concluded his points and said: “We wish the best for all and our method is benevolence. We call on all Islamic countries and their leaders to return to Islam and the Qur’an. We oppose narrow-mindedness; Muslims should have a broad view. Islam has a great capacity. Killing and numerous capital punishments are issues that harm Islam. We must defend Islam and we must avoid acts which harm Islam. Muslims should not do things that are not Islamic.”