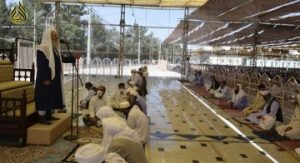 Criticizing the theory of tearing apart the Iranian Balochistan and dividing it into several provinces, the most influential Iranian Sunni leader called such a viewpoint that has been going on in cyberspace and in political gatherings, contrary to the interests of the people of this province.

Shaikh Abdol-Hamid was talking to tens of thousands of worshipers before the Friday prayers in Zahedan’s Grand Musalla on Nov 12, 2021.

He said: “People of different backgrounds in Sistan-Balochistan have historical ties with each other that should be maintained; if the province is divided, these historical ties will be broken, and the interests of the people will be endangered.”

The Friday prayer leader of Sunnis in Zahedan called on the Iranian officials to solve the basic problems of the province instead of dividing it into several provinces.

“The geography of Sistan-Balochistan is so that each part of the province complements the other part. For example, if we separate Chabahar from Zahedan or Iranshahr from Sistan, or Khash from Saravan, the province will face shortcomings”, said the President of Darululoom Zahedan.

“What’s wrong with us to have a province in Iran as large as a European country?” he further asked.

Shaikh Abdol-Hamid described implementation of justice as the best way to develop Balochistan and said: “Implementing justice and bringing people close together are the ways to develop and advance this province.”

“Division of Sistan-Baluchestan in the current situation where the country is facing economic problems causes dissatisfaction of the people and hits our economy. Many will be provoked by such a plan too; it only adds another problem to their problems,” said Shaikh Abdol-Hamid.

“I’d like to ask the representatives of the people of the province in the national assembly not to raise the issue of dividing Balochistan into several provinces in the parliament. Instead of dividing the province, we should cooperate with each other to create jobs for our jobless people and improve their lives,” said the Iranian Sunnis’ leader.

“It’s time for the people of Balochistan to be more close to each other and help each other more than ever. This way helps us to have lasting security and strong fraternity and brotherhood,” Shaikh Abdol-Hamid concluded his Friday speech of Zahedan.

“Today’s people are extravagant. Many people spend their wealth and money in useless ways and places. Buying several clothes for weddings, cooking extra foods, wasting water and electricity and so on, are all among extravagant acts. Many people spend extra money on housings and buy things that are not needed, while Islam has commanded us to be moderate everywhere,” he further said.

“Moderate person is always comfortable and Allah is satisfied with him/her. The Prophet Muhammad, peace and blessings of Allah be upon him, used to use little water in making ablution; he used to take a bath with about four liters of water and perform ablutions with one liter of water. The prophet PBUH was moderate in all aspects of life,” said the prominent scholar of Sistan-Balochistan.

He continued: “Extravagance creates problems in our social and individual life. Famine, poverty, economic problems etc. are possibly the causes of extravagance.”

The Friday Khateeb of Zahedan urged on helping families of prisoners and needy people and said: “The Prophet PBUH said that those who sleep with full stomach while their neighbors are hungry cannot be real Muslims. We should live in this world as travelers. We should spend our lives in good ways. We should strive to perform our duty of enjoining the good and forbidding the evil and work together to reform our society.”