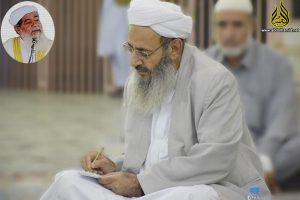 Following the passing of Mufti Nezamuddin Rawanbod, a famous scholar of Pishin District of Rask County in Iranian Balochistan and the president of the Ta’leem-ul-Qur’an seminary, Shaikh Abdol-Hamid expressed his condolences on his death.

“The news of the death of Mufti Nezamuddin Rawanbod made us sorrowful and sad. Mufti Nezamuddin was one of the prominent scholars who served in Sarbaz and Pishin”, said the president of Darululoom Zahedan.

He continued: “This scientific figure who spent his whole life in teaching, researching and resolving people’s disputes, was a great personality in the region.”

“He was the son and good successor of his father, Shaikh Abdullah Rawanbod whose scientific and literary services are not hidden from anyone”, said Shaikh Abdol-Hamid.

“I offer my deep condolences to the people of Balochistan, especially to the dear people of Rask and Sarbaz, to his students, bereaved and family of Mawlana Rawanbod”, the Friday prayer leader of Sunnis in Zahedan said.

He added more: “I ask Allah for full forgiveness for the deceased and high rank in the paradise for him. I hope for reward and patience for the survivors.”