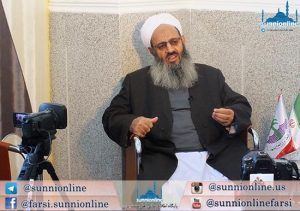 Analyzing the situation in Afghanistan after the complete domination of the Taliban movement, in an interview with Daily Sharq – published in Tehran -, the most influential Iranian Sunni leader refused criticizes on his statement following the victory of the Taliban.

He believed that the socialist and Western systems couldn’t rule over Afghanistan because this country had a traditional culture that was closer and more similar to Islamic laws.

Shaikh Abdol-Hamid believed that the Taliban’s new approach, such as announcing a general amnesty, allowing girls to study in schools and universities, and women to work in the social arena, were examples of a change in their policies that made everyone hopeful.

The Friday prayer leader of Sunnis in Zahedan said: “Although Taliban’s religion has not changed, but their views have been changed; they are not the Taliban of 20 years ago”.

Shaikh Abdol-Hamid believed that the issue of women rights could be resolved in Taliban’s system.

He said in this regard: “The Taliban have accepted that women have the right to present in social areas, get employed in offices and get education at universities”.

“Many critics do not see the advice, they only object to the congratulatory message. I called on the Taliban to form an inclusive government that respects the rights of ethnic and religious communities and minorities”.

The Iranian Sunnis’ leader said: “The issue of Helmand water and portion of Iran from that water can be resolved and the ban on narcotics is possible. The farms of narcotics would be destroyed by the Taliban forever”.

Shaikh Abdol-Hamid believed that drugs had caused a great loss to their society.

At the end of his interview, Shaikh-ul-Islam Mawlana Abdol-Hamid said that when the Taliban came to power in Afghanistan, Iranian officials realized that the Taliban could provide security for Afghanistan and for neighboring countries.

Discrimination by reformists frustrated us

In a another part of his detailed interview with Daily Sharq, the most outstanding Iranian Sunni leader discussed on the U-turn of the Sunnis in Iran in the recent presidential election.

Shaikh Abdol-Hamid referred to the failure of the reformists in addressing the demands of the Sunni community of Iran and said: “We asked president Rouhani to put at least one Sunni or a female as minister in his cabinet but he didn’t. We also demanded Mr. Khatami to appoint any Sunni citizen as vice president, deputy minister, ambassador or [provincial] governor, but unfortunately he couldn’t.”

“During Rouhani’s presidency, we pursued Sunnis’ rights, but we didn’t succeed. Karroubi and Mousavi also failed to meet the demands of the Sunnis when they entered the scene. The reformists didn’t appoint a Sunni as a minister; this is my main concern”, said the president of Darululoom Zahedan.

He added: “The reformists apologized that someone contacted them and did not allow them to appoint Sunnis to key positions. If the reformists needed permission to hire Sunnis, they would tell us so that we would get permission in voting for them. Such a discrimination and inequality has worried the Sunnis and made them frustrated”.

The Iranian Sunnis’ leader continued: “The principlists said: trust us for at least a period, we trusted and voted for them. The team of the president Raisi promised us in Tehran and Zahedan to address the demands of Sunnis. He himself promised to solve the problems”.

“I recommended president Raisi that Sunnis and women should be appointed to key positions”, he added.

“I told president Raisi what was in the interest of the country, and the president listened to me but he did not respond clearly,” he added more.

The Friday Khateeb of Sunnis in Zahedan further said: “After the introduction of the new president’s cabinet, we objected why there weren’t a Sunni or a female as minister in the cabinet”.

“I hope that the Raisi administration will keep their promises because Mr. Raisi had said that he would keep his promises.” said Shaikh Abdol-Hamid.