Afghan Warring Parties Must Resolve their Differences through Negotiations 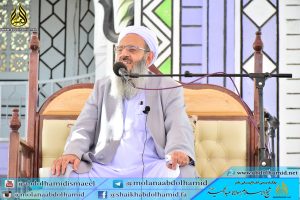 Emphasizing on the importance of ending war in Afghanistan, Shaikh-ul-Islam Mawlana Abdol-Hamid, the most outstanding Sunni leader of Iran called on the warring parties to resolve their differences through negotiations.

Talking to thousands of Sunni worshippers in Zahedan’s biggest Friday gathering in July 30, 2021, Imam of the grand Makki mosque of Zahedan said: “It’s the time for the people of Afghanistan to stop fighting and develop their country and build it”.

“Mawlana Abdol-Aziz (founder of the grand Makki mosque of Zahedan) prayed and cried for the people of Afghanistan. We are well-wishers of Afghanistan and its nation”, he added more.

The Friday prayer leader of Zahedan continued: “I advise the people of Afghanistan not to be provoked by other elements who intend to destroy Afghanistan. The war must end in Afghanistan and Afghans should live in peace and security.”

Shaikh Abdol-Hamid said: “The Taliban do not belong to any country but to Afghanistan. Afghanistan will be secured when the Taliban movement is recognized and heard.”

The Iranian Sunnis’ leader urged: “Resolve Afghanistan’s problems through negotiations and peaceful ways. I advise the current Afghan government and force to put an end to conflicts because both sides of the conflict are Afghans”.

Addressing Afghanistan’s academics and scholars, Shaikh Abdol-Hamid said: “Afghan’s religious and academic experts can lead their country in the light of the directions of the Holy Qur’an and the instructions of the Prophet Muhammad PBUH.”

Shaikh Abdol-Hamid emphasized: “To implement justice, leaders of Afghanistan should follow the Quranic guidance and follow the laws of Shari’ah”.

“I recommend the president and officials in Afghanistan to stop the war and do not force Afghans to lose their lives”, Mawlana Abdol-Hamid addressed the Afghan officials.

He further advised the Taliban: “As well as, I would like to advise the Taliban movement to compromise with all involved parties in Afghanistan. Benefit from the capabilities of experts and academic personalities; they are the assets of Afghanistan as the Taliban are”.

“Let everyone hug and love each other”, president of Darululoom Zahedan said.

“In this situation, the real well-wisher for the people of Afghanistan is the one who saves the people from war and bloodshed and doesn’t kill the people for the sake of gaining power.” said the prominent Sunni scholar of Iran.

Shaikh Abdol-Hamid concluded his speech: “As a well-wisher in a neighboring country of Afghanistan, I feel responsibility to advise the people of this country. I express hope for a bright future for Afghanistan”.