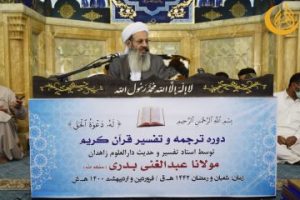 Condemning the bomb attack on a girls’ school in Kabul, Shaikh Abdol-Hamid, the most influential Iranian Sunni leader called it tragic and heartbreaking, asking the people of Afghanistan to unite for establishing peace and security.

Expressing his deep regret over the incident and condemning it at the meeting of the conclusion of the Holy Qur’an’s interpretation of Darululoom Zahedan, Shaikh-ul-Islam Mawlana Abdol-Hamid said: “The explosions at a girls’ school in Kabul, which left dozens killed and injured, was worrying and heartbreaking.”

President of Darululoom Zahedan continued: “Targeting and killing the children who have come to school to get education is the action of ignorant and God-defying people”.

“In recent years we are witnessing the killing of elites, intellectuals, journalists and top clerics in Afghanistan by unknown groups; such actions hit the peace and security of Afghanistan”, said the Friday prayer leader of Sunnis in Zahedan.

“It’s not clear that who are the perpetrators and supporters of such attacks; this is a great tragedy for Afghanistan”, the eminent Sunni scholar of Iran further said.

He stressed on establishing peace in Afghanistan and said: “Negotiations are underway between the Taliban Movement and the Afghan government; we hope that these negotiations will lead to a just and lasting peace that will lead to the establishment of durable security in this country.”

“The people of Afghanistan must take serious measures to bring peace and security in their country”, he urged.

Shaikh Abdol-Hamid stressed: “If the people of Afghanistan stand together and a just peace is achieved, Afghanistan’s international reputation will go up and this will strengthen security in neighboring countries”.

“I hope that lasting peace will prevail in Afghanistan and those who do not want this country to prosper will fail”, the Iranian Sunnis leader said.