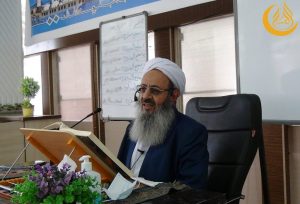 Mawlana Abdol-Hamid said in a part of his Hadith class at Darululoom Zahedan on Monday morning January 18, 2021 that the recent assassinations in Afghanistan, including the murder of journalists, social activists and recently assassination of two female judges were very shocking and dangerous”.

The prominent Iranian Sunni scholar said that the Taliban had denied involvement in these assassinations; also they are unlikely to carry out such acts.
“It seems that some hidden hands are likely to be behind the killings to provoke public opinion, making them disappointed and sabotage the peace negotiation process”, president of Darululoom Zahedan said.

The Friday Imam of Sunnis in Zahedan added: “The enemies of the Afghan peace talks want to create misunderstandings by showing that the Kabul administration is incapable in providing security for its citizens and on the other hand, the other sides just target the social activists and civilians”.

Calling for identifying the killers, Shaikh-ul-Islam Mawlana Abdol-Hamid said: “I’d like to call on the Kabul government and the Taliban to identify the assassins, otherwise such crimes will have unpleasant and irreparable consequences for Afghanistan.”