‘Reformation should be Alternative of Execution’ 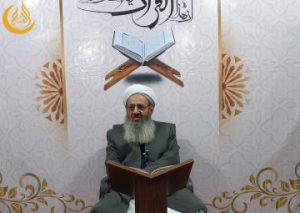 Alluding to the political consequences of death penalty for the country, Shaikh Abdol-Hamid of Sistan-Balochistan, Zahedan stressed on changing the death penalty policy and taking essential measures in order to reform the criminals. He was talking in his interpretation lesson of the Holy Qur’an on Monday evening December 14, 2020.

“Today in many countries, including in our country Iran, some criminals get capital punishment, while if the judicial officials of our country tried to find a way to reform the criminals instead of execution, it would be in the interest of the country and would have the consent of God”, said the most influential Sunni leader of Iran.

Friday Imam of Zahedan continued: “Many who were executed in the country were young, these young people could be reformed and they could be released with commitment and guarantee, and efforts could be made to change them”.

Shaikh Abdol-Hamid stressed: “The execution and physical removal has very dangerous consequences for the country and it raises the protest of other countries against us. We can take other measures for criminals, not to give excuse to others by executing them.”

President of Darululoom Zahedan stated: “It is necessary to reduce and minimize executions in the country”.

“There are many laws that have been implemented for more than forty years but were not effective and need to be changed, for example: Criminal laws, including death penalty which had consequences that have led to the protests at home and abroad”, the eminent Sunni scholar of Iran said.

Shaikh Abdol-Hamid further stressed on the necessity of following the character and Seerah of the Holy Prophet, the Righteous Caliphs and Ahlul-Bayt in dealing with criminals and said: “Few were retaliated or killed in battles at the time of the Holy Prophet Muhammad PBUH”.

The Friday Imam of Sunnis in Zahedan concluded his points by saying: “When Sayyidana Ali, may Allah bless him and grant him peace, arrested a number of Kharijites/Khawarij who had martyred Sayyidana Ali’s troops in the battle of Nahrawan, did not execute them but released them all. Also, he did not kill a single person who was in the opposite side and was arrested during the battles of Jamal and Siffin.”