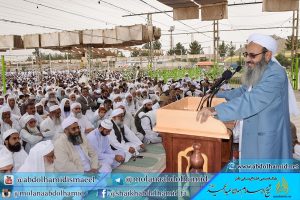 Alluding to the perseverance of the Companions of the Holy Prophet Muhammad PBUH in the way of Islam, Shaikh Abdol-Hamid saw it as the most effective factor of the Companion’s “high position” in the first part of his Friday speech of Sep 25, 2020.

The most influential Iranian Sunni leader pointed out: “Allah has given the good news of Paradise to those who worship Him with steadfastly until the last moment of their lives”.

He went on to say: “The Companions, who received the good news of Paradise, persevered in the path of Islam as much as the biggest power of the world could not divert them from the path of Allah. The obedience of Muhajireen (the immigrant Companions) made them famous and beloved to Allah the Almighty.”

“Emigration of the Companions was aimed for performing the worship of Allah better. The Companions supported the Holy Prophet PBUH and sacrificed their lives and property for Islam and the Prophet Muhammad PBUH. On their mission, they conveyed the message of Islam and Muhammad to the whole world and stood up against the arrogant powers of the world”, Shaikh Abdol-Hamid further said.

“Allah praises the emigrants in the Holy Qur’an for their services, devotion, and self-sacrifice for Islam. It was the reason behind the high position of the Companions”, Imam of the Grand Makki Mosque of Zahedan said.

“Everyone who met with the Prophet Muhammad PBUH and believed in him with faith, became the beloved to Allah and the believers. Steadfastness raised the position of the Companions as Allah announced His satisfaction with them”, Shaikh-ul-Islam Mawlana Abdol-Hamid pointed.

The Friday Imam of Zahedan saw “love for God” as one of the other prominent features of the Companions and said: “The Companions placed the love of Allah in their hearts. They spent their wealth and property in the way of Allah”.

Discrimination is a great injustice
Criticizing the national and provincial officials for violating the rights of religious and ethnic communities in Iran, Shaikh Abdol-Hamid termed it a great injustice.

Talking to thousands of worshipers in Zahedan in the second part of his Friday sermon, he said: “Our request to the provincial and national officials is to avoid any kind of discrimination against different tribes and followers of religions living in Iran.”

“Implementation of justice is very important. Citizens from various backgrounds should enjoy equal rights,” he said.

“Any discriminatory treatment against the nation is an injustice and an unforgivable betrayal to the country and to the people of Iran. According to the national constitution, all Iranians have equal rights. This is the viewpoint of the Supreme Leader as well”, said the Friday prayer leader of Sunnis in Zahedan.

“The narrow-minded officials who implement discrimination among the communities affiliated with which law?” Shaikh Abdol-Hamid questioned.

Addressing the officials, president of Darululoom Zahedan emphasized: “Those who act in favor of their own parties and violate other’s due rights, should reconsider their views and actions. Such a view is a betrayal to the constitution and to the nation. In fact, such people don’t deserve to serve their nation”.

“Let all Iranians have equal rights and opportunities to serve their country with courage”, Imam of the Grand Makki Mosque of Zahedan said.

“As an Iranian citizen and as a well-wisher to all, I consider it my duty to raise such issues in order to maintain durable security and unity and fraternity. To maintain unity and security, discrimination should be eliminated”, the most influential Sunni scholar of Iran said.

Alluding to the occasion of “Sacred Defense Week” in Iran, Shaikh Abdol-Hamid noted: “All Iranians including different tribes and religious communities defended the territorial integrity of their country. All Iranians united in the eight years of the imposed war and defended their homeland”.