Shaikh Ab. Hamid reacted to the murder of “Hayat Baloch”;

Pakistani Officials Must Listen to People of Balochistan 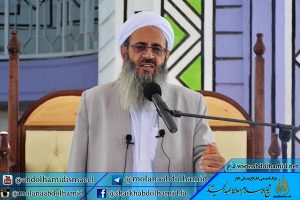 Shaikh Abdol-Hamid pointed out to the murder of a Baloch student “Mohammad Hayat Baloch” in Pakistan’s Balochistan province and called on paying more attention to this deprived province.

Talking to tens of thousands worshipers in Zahedan on August 21, 2020, he said: “The murder of Mohammad Hayat, a Baloch student in Pakistan’s Balochistan province by the Pakistani army’ FC has caused a great concern with a big protest. The FC forces separated the student from his parents and killed him”.

The Friday Imam of Sunnis continued: “Although the officer who committed the murder has been identified and arrested, but it should be noted that the killing of this young man, who was the only high-educated member of his tribe, has caused more grief.”

“We hope that the Pakistani officials will pay more attention to Balochistan which is our neighbor. The voice of the people in Balochistan should be heard and their problems and demands should be considered in any possible way”, the Iranian Sunnis leader urged.

The famous Baloch scholar concluded his points by saying: “Pakistan’s Balochistan province is considered of the most deprived province of this country that requires the Pakistani leaders to make more efforts for the development of Balochistan and creating jobs; taking such measures are vital and it will bring national unity and security in Pakistan”.