Muslims Need to Form a “Union” for Unity 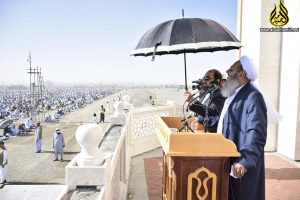 Shaikh Abdol-Hamid of Zahedan, Iran urged on the necessity of forming a union for Muslims around the globe.

Addressing thousands of worshipers at Zahedan’s Grand Musalla, at Eid al-Fitr prayers ceremony of May 24, 2020, Shaikh Abdol-Hamid suggested the heads of Muslim countries and Muslims around the globe to form a “union” consisting different Islamic sects to achieve unity and to resolve crises of the Islamic world.

Expressing his happiness that Eid al-Fitr was celebrated in the Islamic countries, Shaikh Abdol-Hamid considered it as a kind of unity among Muslims and saw it an opportunity for the Muslim world to unite.

The most influential figure of Sunnis in Iran said: “I wish that Muslims would have a scientific union consisting of all Islamic sects and schools of thought, which would announce the beginning of the holy month of Ramadan and the days of two Eid .In an interview at Mecca Conference, I made it clear that Muslims should form this union; the issue of seeing moon is the best option in this regard”.

The Friday Imam of Sunnis in Zahedan said: “Today, The United States and the Europeans are united for their own interests and formed a union. Russia gathers several countries around itself; they ink up military and economic agreements with each other. Muslims who are proud of Islam should be united for the benefits of Islam; they need to sign economic, defense and military treaties with each other”.

Shaikh Abdol-Hamid continued: “The enemies of Islam have always been making efforts to create divisions among Muslims; unfortunately Muslims have no foresight, that is why they lost Jerusalem and Palestine have been occupying by Israel for decades. The United States wants to implement the ‘deal of the century’ plan to annex parts of the West Bank with Israel; this is a big tragedy for the Islamic world”.

Shaikh Abdol-Hamid pointed out to the current crises of the Muslim world and said: “Disputes among Muslims have led enemies to enter in countries such as Syria and Iraq for their own interest, looting their capital and murdering them ruthlessly.”
He added: “Muslims and leaders of the Muslim countries are responsible for these tragedies and problems”.

“Muslims are suffering from this unpleasant situation and they are worried”, Shaikh Abdol-Hamid added.

Officials should solve people’s housing problems
In another part of his speech, Shaikh Abdol-Hamid pointed to the housing problems of people in Iran, especially in Iranian Balochistan and said: “Housing problems put pressure on people. They can’t pay rent.”

“Due to the devaluation of the country’s currency, rental money is not valuable for homeowners, it is also difficult for tenants to pay rent; therefore authorities should think about people’s housing problems. The Iranian citizens suffer from economic crisis; we hope that authorities will find a solution in order to reduce economic pressures”.

He added: “Instead of selling the land to villagers, government should allot them for free. If it is necessary to take money, it should be as much as the construction cost.”

The Iranian Sunnis leader continued: “The ancestors of the people of Zahedan and the surrounding areas fought against the British occupiers and were killed to protect this land. Therefore, the authorities should consider these issues”.

“People from different tribes lived in these areas before the creation of Zahedan’s city. So officials should not let their due rights to remain oppressed,” he added more.

Shaikh Abdol-Hamid said: “Government’s right on people is to follow the rules. People are also supposed to follow the regulations of Natural Resources Bureau, too.

Eid al-Fitr is one of the historical days in Islam
In the first part of his speech, Friday imam of Sunnis referred to Allah’s spiritual blessings to human beings such as Ramadan and Eid al-Fitr and considered them as Allah’s great mercies. He urged that human beings should always be thankful to Allah the Almighty for His various blessings.

Alluding to all kinds of material and spiritual blessings of Allah, he said: “Eid al-Fitr is God’s spiritual program and one of the historical days in Islam. Allah wants to purify human’s body and soul. Allah has provided for us a variety of delicious foods and material blessings to strengthen our body in order to benefit from these blessings and to be thankful to Allah the Almighty”.

He continued: “Allah has provided Ramadan, Zakat, Hajj and other divine rituals for human being to purify his soul”.

“To be successful in this world and in the hereafter, we should obey Allah’s commands”, Shaikh said.

He added: “The worship is accepted when it is for Allah’s satisfaction. Ramadan, Eid, and all divine blessings are for you to know your benefactor (Allah) and to be thankful to Allah, the Almighty. Fasting, zakat, prayers and reciting the Holy Qur’an and so on are for human’s purification. Be thankful to Allah who has set up various programs to purify your body and soul. All blessings are from Allah. See Allah in every blessing”.
Mawlana Abdol-Hamid continued: “How much Allah is merciful and gracious to us; your presence today here is the result of Allah’s mercies; Today you are happy because you have fulfilled Allah’s command”.

Imam of Grand Makki Mosque of Zahedan urged: “Let’s obey Allah’s commands everywhere and keep the love of Allah and the Holy Prophet PBUH in the depths of our hearts. This is an honor for us.”

In his last points, Shaikh Abdol-Hamid urged: “Observe the health protocols in public places and at markets. Your health and country’s safety are in observing health protocols.”

To Solve Country’s Problems, Officials should Listen to Opponents too Use the Causes but See the Real Creator Shaikh Ab. Hamid’s Condolence Message over the Passing of Ml. Jahandideh Islam Emphasizes on Saving, Forbids from Extravagance Islam has Solutions to Save Mankind from Calamities Leave Sins to be Protected from Disasters Americans should Fight Racism Shaikh Abdol-Hamid’s Condolence Message on Martyrdom of Dr. Ayaz Niazi Office of Shaikh Ab. Hamid Appreciated Officials for Arresting a Blasphemer Shaikh Expresses his Condolences on Passing of Dr. Khorramdel