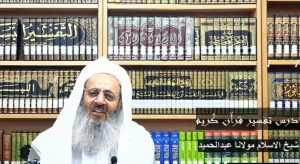 Referring to the murder of three young men in Iranshahr city of Iranian Baluchistan by Iranian forces, Shaikh Abdol-Hamid called on the officials for transparency and investigation into the shooting.

While addressing the interpretation lesson of the Holy Qur’an at Darululoom on Wednesday May 13, 2020, Shaikh Abdol-Hamid pointed out to the death of three Baloch young who were killed by police in Iranshahr and demanded transparency and accountability in their killing.

Shaikh-ul-Islam Mawlana Abdol-Hamid believes that there are ambiguities behind their murder which should be clarified.

Shaikh Abdol-Hamid said: “We do not have enough information about the incident, but the authorities should clarify the matter and tell the truth on order to remove people’s concerns.”

The Iranian Sunnis’ leader urged that the fact should be clarified although to the detriment of anyone.

Shaikh Abdol-Hamid avoided the police from committing crimes and said: “If the police commit murder, the crime is much more serious than the ordinary person, because police are responsible for providing security. So if a policeman commits murder, he will damage security more”.

He called the authorities to take decisive action in fighting against the violator officers.

Shaikh Abdol-Hamid said that there were killings by the police officers in the past and the police accepted their personnel’s faults, so this case also should be addressed.

President of Darululoom Zahedan asked the officials to address the complaints of the victims’ families who were killed in Iranshahr.