Some Unjustly Reacted to my Recent Remarks 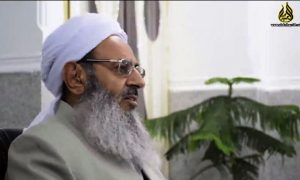 About two weeks ago, Shaikh Abdol-Hamid issued a video speech and called all people to return to the real healer. As well as he criticized the suspicious activities of al-Mustafa International seminary. His remarks made many to react unjustly and even some threatened him.

Issuing a new statement, the most influential Iranian Sunni leader said that his remarks about the al-Mustafa seminary’s activities were with the intention of reformation and for transparency.

He said that he had spoken about monotheism and he had reasons for his words from the Holy Qur’an.

The president of Darululoom Zahedan believed that only Allah could help human beings especially in the face of problems and infections such as the Covid-19 virus.

Shaikh Abdol-Hamid issued a clip in defense of himself saying that he had spoken of the oneness of Allah. He gave reasons from the Holy Qur’an.

The Iranian Sunnis leader continued that the Holy Qur’an says that only Allah should be asked for help. He said his remarks about al-Mustafa’s activities were for transparency.

Shaikh-ul-Islam Mawlana Abdol-Hamid believed that Sunnis concerns over al-Mustafa Shia Seminary-University’s activities should be addressed. He said that his criticism was aimed for reformation not for dispute.

Shaikh Abdol-Hamid complained that unfortunately some ignore the efforts of Sunni scholars in Iran on “maintaining unity” and establishing “security”. He said that Sunnis’ path is moderation. Sunnis are not affiliated with any foreign country or extremist faction.

The most influential scholar of Sunnis in Iran criticized official sides for ignoring his services on maintaining unity saying that despite Sunni scholars’ efforts for maintaining unity and establishing peace, they had been ignored.

He alluded to negative campaigning of some websites against Darululoom Zahedan and its teachers and managers. He said that some state-funded websites and social media pages have been launching propaganda against Sunni scholars; complaints of them have been refused as the websites are affiliated with some state offices and bureaus.

At the end of his speech, Shaikh Abdol-Hamid called on the government to deal with the extremist Shiite factions. He regretted that some extremists were insulting Sunni leaders in media.

“If there is no any place to submit complaints, Allah is always present and we will put forward our complaints. We just want reformation,” Mawlana Abdol-Hamid urged.