Recent Incidents in Syria’s Idlib Hurt Every Human being 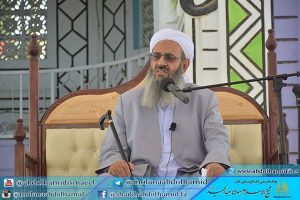 Mawlana Abdol-Hamid pointed to the rising tensions in Syria’s Idlib and said that the bitter events in Syria had hurt heart of every human being. He was talking before the Friday prayers in Zahedan on Feb. 21, 2020.

The outstanding leader of Sunnis in Iran said: “Savage bombardments in Syria’s Idlib have displaced more than a million people, including women and children”.

“Where are the awakened people who are ready to defend these oppressed people?” Shaikh Abdol-Hamid questioned .

“Some people think that Allah does not see their cruelty and oppressions, while He sees everything and He will punish the oppressors”, he added.

Holy Prophet’s recommendations should be followed for protecting from Coronavirus
Mawlana Abdol-Hamid pointed out to the Coronavirus outbreak in the country in another part of his speech and said that reports indicate that the Coronavirus was spread to our country and it had been reported in some provinces.

Shaikh Abdol-Hamid said that according to the Prophet’s hadith, no one should leave the city at the time of the outbreak of such infections. He believed that the Chinese did not follow this tradition.

The Friday Imam of Sunnis in Zahedan said that the Coronavirus was spread by Allah’s will and it would not inflict humans without His will.

Shaikh-ul-Islam called on the audience for repentance and to return to Allah the Almighty to be protected from Coronavirus and other similar infections. He also encouraged people to give charity, pay Zakah, offer prayers and recite the Noble Qur’an to be protected from divine punishment.

The most outstanding Iranian Sunni leader expressed his concerns over the election and process of counting votes and he said that Zahedan’s parliamentary elections had always been concerned the people, and people’s complaints had not been answered.

He said: “The Supreme Leader of the Islamic Revolution considered protecting the votes as people’s rights, so I hope that a candidate who wins the majority votes; should be elected”.

The Friday Imam of Sunnis in Zahedan urged that trust, justice and protecting people’s votes are the most important issues in establishing peace in the society.

The Iranian Sunnis leader pointed out to the mass disqualification of applicants in the eleventh period of the parliamentary election and emphasized that the one who wins the most votes, s/he should win the election.

Shaikh Abdol-Hamid said that the illiterate people who are not able to write should also participate in elections with accompanying of a literate person.