Shaikh Ab. Hamid’s remarks on the “Deal of the Century”; 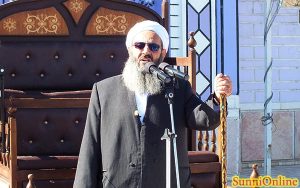 Shaikh Abdol-Hamid of Zahedan, Iran considered the so-called deal of the century an imposing unjust plan, believing it would fail.

Shaikh-ul-Islam Mawlana Abdol-Hamid saw the deal of the century announced by the US president as one of the Israel and US’s shameful actions. He was speaking to Sunni worshipers in Zahedan before the Friday prayers on January 31, 2020.

Pointing out to the bitter incident of unveiling of a peace plan for the Middle East by the US president with association of Israeli officials and the presence of “some weak Muslims who were unable to defend themselves”, Khateeb of Sunnis expressed his hope that the deal will be failed as all free-minded sides had refused it.

The Friday Imam of Sunnis in Zahedan said: “The US president wants to impose his so called deal of the century on Palestinian Muslims who are one side of the conflict, while any peace should be achieved through negotiation with the constant and presence of both parties by third party’s arbitration.”

He said that according to all cultures especially the principles of Islam, peace should be brought and obtained through fair and just ways. So peace in Palestine can be established through previous negotiations and satisfaction of the both sides and their presence in all talks.

“The US president has planned the deal of the century for Israel’s benefits and has clearly announced that he supports Israel and stands by this regime; the plan was arranged for the benefits of the Jews and Israel”, the Iranian Sunnis leader said.

The president of Darululoom Zahedan said: “Trump’s peace plan is quite one-sided and biased; in this peace plan al-Quds/Jerusalem, the first Qiblah of Muslims has been handed over to Jews. As well as, the Jewish settlements that were built on Palestinian soil have been declared parts of Israel. This plan aims to make Palestinians surrounded by Israelis”.

Shaikh-ul-Islam said more: “The so called deal of the century will fail because Palestinians, Muslims around the world and other free nations do not accept it; the US and Israel resort to force to impose their peace plan; they will fail because resorting to force will never be succeeded.”

“Muslims around the globe want an independent Palestinian state in which the rights of all will be respected”, Mawlana Abdol-Hamid urged.

Differences among Muslims and Islamic countries, the reason behind the “Deal of the Century” project

Mawlana Abdol-Hamid believes that the Deal of the Century was imposed as a result of differences and disputes among Muslims saying: “After more than seventy years of oppression against the Palestinians, the US and Israel unveiled a peace plan to violate Palestinians’ rights; as they knew that Muslims and Islamic countries were involved in conflicts and sectarian disputes, they took advantage of this opportunity.”

“The arrogant states had been designing to divide Muslims in order to pave the way for the biased deal of the century and to impose an unfair peace plan on Palestinians”, he added.

The Imam of the Grand Makki Mosque of Zahedan said: “Unfortunately, today Islamic countries have become a threat to each other, which is why the Western countries dominated over them. All together, the Islamic countries have a responsibility to continue protesting against this cruel plan because solo protests have a little effect”.

Mawlana Abdol-Hamid emphasized on the necessity of unity among Islamic countries and called on Muslims to pray to Allah for changing their unfavorable situation.

“For over seventy-two years the UN and the EU countries have done nothing for the Palestinians and the Islamic countries have been involved in internal conflicts; my message to Palestinians is to return to Allah, to pray and establish their regular prayers”, the Iranian Sunnis eminent scholar said.

Spread of “Corona virus” in China is a divine punishment, result of cruelty against Muslims

Shaikh-ul-Islam went on to point to the spread of the Corona virus in China, saying that China is one of the rich and developed countries which unfortunately has been torturing Muslims; they have killed them and had no mercy on their children. They separated children from their parents, kept the kids in camps to change their minds and beliefs wishing to eradicate Muslims from China.

“China that suffers from a divine punishment today has tormented Muslims; the Chinese government was warned to avoid oppression against Muslims by the whole world, but rather she continued her oppression”, the Friday Imam of Sunnis in Zahedan said.

“When the powerful countries commit crimes and injustice, they think that there is no power superior to them; they should know that Allah hears the cry of the oppressed and He will destroy them”, Mawlana Abdol-Hamid said.

Do not exaggerate in praising religious elders

Shaikh Abdol-Hamid pointed out to the death anniversary of the Holy Prophet’s daughter Fatimah, the wife of Ali, may Allah be pleased with them, saying that Fatima was similar in appearance and morals to her father, the Prophet Mohammad PBUH, so she is the best role model to be followed.

The Imam of the Grand Makki Mosque advised followers of all sects to avoid exaggeration in the praise of elders and called on Muslims for unity all over world.