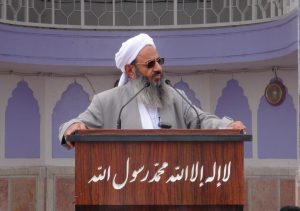 Khateeb of Sunnis in Zahedan alluded to the National Police Week in Iran and termed “obtaining public support and trust” the most important way leads to success.

Talking to worshipers in the central grand mosque of Sunnis in Zahedan on 4th Oct. 2019, Shaikh Abdol-Hamid said: “It is very important for any country to implement peace at borders. The numerous enemies of the Islamic Republic of Iran have been struggling to make the country insecure by interfering via borders. It makes the responsibility of border guards more sensitive.”

“We all should support the frontier guards by making Du’a and guiding them correctly if they need. All Iranians have sympathy with the border guards. The police forces belong to common masses and they should move with public. The success of police lays in public trust and support. Public support is the biggest asset for the police forces and any other organization,” he added more.

President of Darululoom Zahedan said: “As much as the police strengthen its connection with influential classes like Ulama, teachers and academic figures and etc. they will be more successful in implementation of law and order.”

“I’d like to advise all police officers and police stations’ chiefs to urge on their men and personnel to be with people; they should avoid from opening direct fire if they are suspicious. If there is 90% possibility of a crime and 10% of exoneration, the people should not be targeted just because of that 10 percent,” he underlined.

Mawlana Abdol-Hamid said: “Policemen should tolerate damages, but avoid from shooting and opening fire which may target innocent individuals. It is good for unity and peace, as well as the enemies would not find any excuse to propagate.”

He said: “The dear residents of Shuru and Galougah really played a sacrificing role in the incident of Zahedan-Tehran train’s derailment as they rescued the victims before the arrival of rescue teams from Zahedan.”

“People’s rescue to the victims of this incident was exemplary. It is the sign of our people’s vigilance and it is a proof that these people value the whole Iranian nation and all human beings,” Shaikh Abdol-Hamid further said.

At the end of his words, Shaikh Abdol-Hamid asked the Almighty for forgiveness of the deceased passengers and cure for the wounded ones.