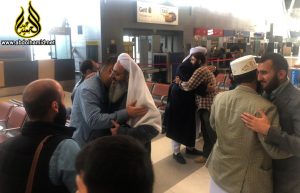 The most influential Iranian Sunni scholar arrived Zahedan, his hometown, on Friday morning, Sep. 20, 2019 after visiting the Republic of Tatarstan for 8 days.

The official website of Shaikh Abdol-Hamid reported, he left Tehran to Kazan on Thursday 12th Sep. 2019 to give lectures in the Islamic Academy of Bolgar and participate in the international conference of Muslim scholars in Kazan city.

Mawlana Abdol-Hamid was invited by Mufti Farid Salman, a prominent Tatar Muslim scholar, to attend the international conference of “Duty of Muslim Ulama in the light of Qur’an and Sunnah in the Current Era”.

In this journey, Shaikh Abdol-Hamid met with people from different backgrounds of Tajik and Tatar origins in Bolgar and Kazan cities.

President of Darululoom Zahedan also had meetings with the grand Mufti of Tatarstan, Mufti Kamil Hazrat Samiullah and the chancellor of the Islamic university of Russia.