Mawlana Ab. Hamid said in a meeting with some Shia clerics and officials: 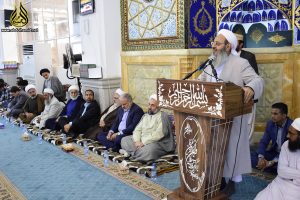 Shaikh Abdol-Hamid said in a meeting with Shia scholars and top provincial officials in grand Makki mosque that Sunni scholars unanimously fight with extremism and bigotry.

A delegation of Shia clerics and provincial officials visited Darululoom Zahedan and grand Makki mosque, the biggest Islamic seminary and mosque of the Sunni community in Iran, yesterday July 30, 2019 where they met with the teachers and students of Darululoom.

President of Darululoom Zahedan shed light on the history and short introduction of Darululoom Zahedan in the presence of the general governor of Sistan-Balochistan, the representative of the Supreme Leader in the province, Dr. Masoodi, chairman of the MPs in Fars province and Hojjat-ul-Islam Mahdavi-Mehr of Jamiat-ul-Mostafa al-Alamiah.

He said: “Darululoom Zahedan was founded in 1970 by late Mawlana Abdol-Aziz and since its foundation it has been under development. Apart from the 9 years’ general curriculum, there are many specialization courses, too.”

“Our Islamic schools and seminaries believe in temperance, fraternity and unity of the entire Muslim Ummah. We think Muslims should respect each other and besides acting upon their jurisprudence and tenets, they should maintain their fraternity. Our alumni follow this ideology and route inside and outside of the country,” Shaikh Abdol-Hamid said.

He went on to express his views about the issue of foreign students and said: “In the past we had students from Afghanistan and Tajikistan who came here to seek knowledge and get Islamic education from our seminaries including Darululoom Zahedan. After returning back to home, they have been following temperate viewpoints of the Sunni seminaries.”

Chairman of the Coordination Council of Sunni Seminaries further said: “Countries compete with each other to attract more and more students to propagate their cultures and thoughts via those students making them ‘representatives’. We should also have plans to facilitate the way for foreign students in Iran. Some students may prefer Sunni schools and seminaries instead of state-run universities and centers like Jamiat-ul-Mostafa al-Alamiah.”

Modern international circumstances need new thoughts
In another part of his speech in the presence of Darululoom Zahedan’s teachers, students and Shia scholars and officials, he said: “The most important need of Muslims in this era is “unity” and “fraternity”.”

“We are in a modern world with modern conditions and circumstances. These circumstances require new approaches and thoughts. Shia and Sunni madrasas and seminaries should recognize the new conditions and their necessities. They should get prepared for those circumstances. The past viewpoints and behaviors which used to create hate among the followers of different sects should not be continued; these cultures and views should be uprooted,” the most outstanding Iranian Sunni scholar urged.

He also said: “There is no doubt that Sunnis love the household of the prophet PBUH. It is key point to unite Muslims more than past. Shia and Sunni people should make bilateral relationship that reduces bigotries and wrong thoughts about each other. Ulama should be pioneers in this regard.”

At the end of his speech, Shaikh Abdol-Hamid asked the officials to broadcast Sunnis’ Azan on time from the national radio and TV channels in Sistan-Balochistan.

More than 70% of people in Sistan-Balochistan belong to the Sunni community, but their Azan cannot be heard from the state-run radio and TV.