The most influential Iranian Sunni leader urged in an exclusive talk with SunniOnline: 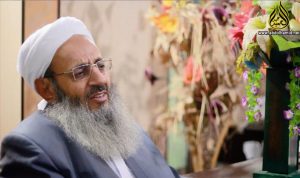 SunniOnline: the critical situation of Iran and various kinds of crises which have affected both the country and nation are obvious for everyone. Unjust sanctions and recently military threats of the US have intensified these problems and anxieties. The ongoing situation needs solutions free of partial and factional tumults.

Shaikh Abdol-Hamid, one of the most important Sunni figures in Iran and compassionate personalities with moderate viewpoints on political, social and cultural issues, recently talked with “SunniOnline”, the official website of the Sunni community in Iran, expressing his views on the ongoing domestic and foreign crises of Iran and their solutions.

Iran should support minorities in Muslim countries only diplomatically
The most influential Iranian Sunni leader termed the current domestic and foreign crises in Iran “unprecedented” and said: “If we conduct a political pathology, we will see that the best way to support minorities in Muslim countries or majorities who have been deprived of their rights, is political and diplomatic support. If the Islamic Republic of Iran wants to support nations, it should via political and diplomatic channels.”

Military support intensifies foreign crises
Mawlana Abdol-Hamid went on to say more: “Military support of any foreign regime, movement, political or religious party is not good for any country. It damages national interests. The military option has not been useful for any country, but it has given birth to more foreign crises and political, economic and security damages and strokes.”

Middle East needs peace & reconciliation
Khateeb of Sunnis said that “peace and reconciliation” was the urgent need of the Muslim countries.

“The best solution for differences of the Muslim countries is “reconciliation”. The holy Qur’an forbids Muslims from disputes and enjoins them to show patience and tolerance. Muslim masses and leaders should tolerate each other’s viewpoints, schools of thought and cultures in order to prevent exacerbation of differences and clashes,” he added more.

Member of the executive board of the MWL told SunniOnline: “The Islamic Republic of Iran and the rest crisis-hit Muslim countries in the Middle East need peace and reconciliation urgently. The European and Western powers have been struggling to ensure peace for Israel by bringing Muslim countries against each other and introducing them enemies of each other. We should be vigilant and apply a strategy to forbid some Muslim countries going towards Israel. The Zionist regime is an occupying usurper country which has occupied the first Qibla of Muslims and it has been oppressing Palestinians and it is not ready to accept any negotiation and reconciliation which recognizes Palestinians’ sovereignty.”

Why Iran needs a U-turn?
Mawlana Abdol-Hamid recommended the Islamic Republic of Iran to make a U-turn in domestic and foreign policies. He said: “The ongoing circumstances of the world require a revision in the strategies and policies. The country needs a U-turn in the foreign policy. We should behave wisely and change or modify the failed policies which have had no fruits or they jeopardize the country.”

He termed “lack of due political freedoms” as one of the important crises in Iran and said: “Lack of due freedoms such as: freedom of speech, parties, associations, intolerance of constructive criticisms and legal freedoms are among the most important domestic crises.”

“It is a big fault to not tolerate opponents which has caused challenges for the country. Release of political prisoners, lifting the siege of 2009’s presidential election’s opposition leaders put under house arrest and listening to people’s demands and negotiating with the opposition can help us to get rid of these crises,” president of Darululoom Zahedan said.

He said that the country was away from “political stability” which can be obtained by ensuring legal freedoms, focusing on constructive criticisms, minorities’ due rights, paying attention to the nation’s demands and foreign détente.”

The country’s economic problems have political reasons
In another part of his interviews with “SunniOnline”, Khateeb of Sunnis said: “The main reason behind ongoing economic crises is political and absence of political stability. For contest in economy with the neighboring countries we need political stability and good relations with other countries.”

“The main problem in the country is not economic, rather it is political; if we resolve our political problems, despite the confrontation of the US and Israel, the economic crises will decrease.”

The most outstanding Iranian Sunni scholar addressed armed forces and said: “We recommend the dear military to avoid from political and economic competition. They should go back to their original job and duty and of course it will increase their popularity.”

“Embezzlements and financial abuses in the country prove well that selection and employing of personnel have not been carried out properly. This is a fact that both officials and people confess,” he added more.

Shaikh Isma’eelzahi told “SunniOnline”: “If there is any legal obstacle for entrance of capable and specialized managers, such regulations should be modified and changed. If some sides impose their illegal views to affect selection process, such acts should be stopped. We have lost many intellectuals in the decades-long brain drain whose specialization is the need of us.”

“We are not hopeful about the reformists that they will make a U-turn towards people and get their satisfaction. Political wings should sit together and find solutions for the crises,” he added more.

Mawlana Abdol-Hamid further said that the Islamic Council Assembly (parliament) has been failed, too, to remove obstacles which have been before the nation.

“Making the circle of approving candidates and individuals by the Guardian Council is another reason behind the ongoing crises in the country. Due to this policy, strong capable individuals cannot be elected as the assembly members and other posts like presidency,” he underlined.

Khateeb of Sunnis said: “Some problems in the cabinet and government return to the Guardian Council’s behavior and policy. This council needs a fundamental reformation. Statesmen and decision-makers in the Islamic Republic of Iran should not have limited religious sights and views; rather their approaches should ne national and international.”

“We should show an example for others in this regard. Until now, we could not attract the world and present a modern example of Islam which is in accordance with the conditions of the time,” he added more.

Iranian Sunnis still suffer from discrimination
President of the biggest Islamic endowment educational center of the Iranian Sunnis shed light on the problems of the second religious majority of Iran and said: “After four decades passed since the revolution, still the Sunni community suffers in this Islamic country facing different pressures and discrimination.”

“Iranian Sunnis have been generally away from power offices and they only have some elected representatives in the national assembly. In regional and provincial levels, presence of the Sunnis is also limited and there is no any balance. The Sunni community is strongly angry with this attitude and they persistently expect their elites should be engaged,” he urged.

Shaikh Abdol-Hamid told “SunniOnline” about the problems and restrictions of the Iranian Sunnis: “The Sunnis have no mosque in Tehran while the Christians, Jews and Zoroastrians have their own worship places and we are happy with it, but the question is that why Sunnis cannot have their own mosques?”

“Unfortunately in some regions and provinces like Khorasan, Bam and Kerman and other regions we witness interference in religious issues of Sunnis. This attitude cannot be seen anywhere even in Russia.”

He said: “Muslims have mosques in all capitals in the non-Muslim countries and offer Friday and Eid prayers freely. In Riyadh, the capital of Saudi Arabia, Shia Muslims have their own mosque. There is limitation for offering prayers in no place in the world.”

Don’t persist on the previous wrong strategies
Mawlana Abdol-Hamid addressed the higher officials of the Islamic Republic of Iran and said: “If we continue the past policies and strategies, we cannot be hopeful about future. Future may be in the interest of those who want a fundamental change.”

“The pressures, bottlenecks and restrictions which do not exist in Islam should be removed from the Islamic Republic of Iran and the vast view of Islam and Qur’an should rule.”

He concluded his points with the talk with SunniOnline: “By changing these problems domestic and foreign crises can be resolved. Some of the changes can be carried out by the supreme leader and some others by changing the constitution. Negotiation with the US is not the major problem; the most important thing is to change strategies. It is the way to maintain the Islamic Republic of Iran.”