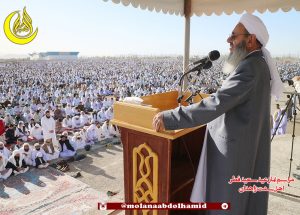 The official website of Maulana Abdol-Hamid reported that Khateeb of Sunnis in Zahedan said: “Allah Almighty likes justice and implementation of justice even more than personal worships like offering prayers. Justice is very important in Islam; it is one of the main elements of Deen according to Sunnis and one the principles of Islam according to Shias.”

“Durable peace is the fruit of justice. Justice strengthens national unity and peace. We all are responsible to act justly. Men should be just with their children and wives and states should be just with their people who belong to different ethnic and religious sects and communities. Allah orders us in the Noble Qur’an: “Surely Allah enjoins justice, kindness; [16:90]”, he added more.

The most influential Iranian Sunni leader said: “The constitution is a national contract for all Iranians. They should respect law; especially officials and power-holders should execute law and respect it.”

“The freedoms which have been clarified in the constitution should be respected and implemented. The state and government are supposed to stop and prohibit illegal religious pressures and self-made obstacles. We’d like to draw attention of the authorities especially to Sunnis live in metropolises and they are in minority over there; they are vulnerable; their due rights should not be violated by powerful elements and bureaus against the constitution,” he underlined.

Friday imam of Sunni of Zahedan further said: “The respectable people of Ahvaz are also Iranians and they should get officials’ attention. Authorities should be careful about the due rights of those people; their rights should not be violated and they must be free to worship Allah according to their ways.”

“Respectable people of Ahvaz sacrificed for the country and they were victims of Ba’thi assault in the 8-year-long war. They should be respected and cared more,” he said.

Shaikh Abdol-Hamid said: “Religious issues and tendencies should not deprive people from their due rights.”

He urged on the officials and said: “The state and masses have bilateral rights on each other and no one should violate the other’s rights. I’d like to call on the officials to abide with the international treaties which are for the whole world. We should try to not give justification to any side, but the indisputable rights of the nation should be defended, too.”

“All Muslim countries and nations should be vigilant as the enemies create sectarian disputes and they have plans for creating distance between nations and states, religious and ethnic communities and they misuse all chances to create troubles,” Maulana Abdol-Hamid added more.

He said: “Muslims should be careful; the US, the occupying regime of Israel and other powers just want to steal our interests. So Muslims should protect their independence and show more wisdom. Tension in the Muslim world has been in rise and it is not in favor of Muslims.”

At the end of his speech, Shaikh Abdol-Hamid said: “Eid al-Fitr of 2019 was exactly on 5th June as it has been announced in the country. We completed 30 days of fasting and there were not acceptable legally. So no one can blame us that we announced Eid a day later in order to avoid its coincidence with the death anniversary of Ayatollah Khomeini, the founder of the Islamic Republic of Iran.”