People are Happy with New Governor 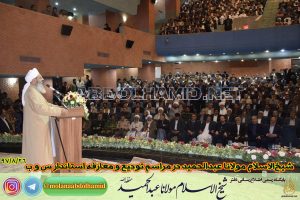 Mawlana Abdol-Hamid said in the leave-taking ceremony of Sistan-Baluchistan’s governor that people were happy with new governor’s appointment urging on “equality” and “correct management and planning” for serving people.

The official website of Shaikh Abdol-Hamid reported the speech of him in the governor house of Sistan-Balochistan where he said on Saturday 17th Nov. 2018: “As Eng. Mouhebati, the new governor, is a tactful and sympathetic person and he knows well the potentials and deprivations of Sistan-Balochistan, we hope he can recognize the priorities of the province.”

He termed “unity” the biggest point in the province which should be maintained and protected, adding: “Unity can be maintained and strengthened by equal behavior and implementation of justice. Different ethnic and religious sects should be gathered and it is the best strategy.”

“Sistan-Balochistan has been suffering from famine as well as economic sanctions on the country have affected people’s economy badly; they are in a critical situation and need officials’ day and night efforts to ease their problems,” president of Darululoom Zahedan underlined.

He urged on “meritocracy” and said: “We do not support weak officials; regardless to their sect. we only support strong and fair authorities who serve people. We do not want religious officials; because we do not offer prayers behind them. Just appoint talented and strong directors who serve all equally.”

“Once I told city council members of Zahedan that find any talented mayor for the city; if there is no any capable person among Shia and Sunni communities, appoint any non-Muslim capable and talented person who can do something for the city,” Shaikh-ul-Islam Mawlana Abdol-Hamid said.