Study “Obstacles” on the Path of Unity, Change Policies 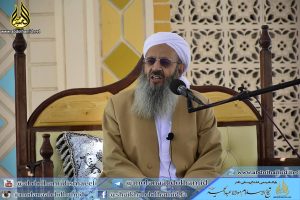 Counting the factors for approaching practical unity, Shaikh Abdol-Hamid emphasized on pathology and study of “obstacles” on path of unity and bringing changes in policies and strategies related to unity.

Talking to tens of thousands of worshipers in Zahedan, Iran on 16th Nov. 2018, Khateeb of Sunnis said: “Unity is a very important and good issue, but unfortunately there is no practical unity. We have missed many opportunities to reach real unity.”

“The most important factors for reaching to practical and real unity is respect and maintaining mutual respect. As well as, equal behavior and implementation of justice make all ethnic and religious communities more united and closer to each other,” he underlined.

President of Darululoom Zahedan said: “Slogans for unity should not be just for hiding facts, rather it should be real and practical. While our enemies have brought some countries on the ground of fighting, we should be vigilant and recognize the importance of unity.”

“If unity is our need, we should study why we couldn’t reach to real unity and what are the obstacles on the path of unity. We have to change many policies and strategies regarding unity. Sights should be wider,” he added more.

Mawlana Abdol-Hamid said: “Unity is a valuable thing and it needs some expenses. We as Muslims should pay the expenses for unity; without sacrifice we cannot be united.”

At the end of his speech, Khateeb of Sunnis alluded to appointment of new governor of Sistan-Balochistan province and urged on gathering all communities and taking advantages of this strategic province.

He addressed all directors and officials: “Avoid acts that compel people to pray to Allah against you for your dismissal. Rather act as people miss you and regret for your absences when you leave the post.”