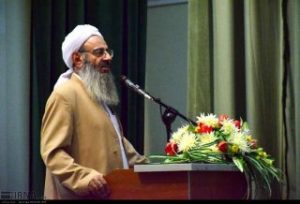 The most influential Iranian Sunni leader urged on studying and researches on the current problems and ongoing crises in a state-run meeting held in the governor house of Sistan-Balochistan.

Mawlana Abdol-Hamid said in the meeting: “I think the current conditions need our attention to discuss and study the problems and present solutions instead of counting achievements of the revolution.”

“All kinds of crises should be managed and controlled wisely. Today people suffer from massive economic problems. Even wealthy people cannot tolerate the situation and high prices have influenced all,” he added more.

President of Darululoom Zahedan said: “Officials and rulers should be with masses in such difficult times and they should realize their problems. Ethnic and religious communities also should maintain their unity and solidarity. Bigotry and ethnic moves damage us in this situation.”

Shaikh Abdol-Hamid termed “Islamic vigilance” one of the most important achievements of the Islamic revolution in Iran.

He said: “Iranian revolution boosted people’s reliance on Allah and self-esteem. Some uprisings in the Middle East have taken example from this revolution.”