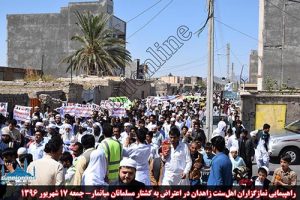 Shaikh Abdol-Hamid decried the crimes of the Myanmar government and forces against Rohingya Muslims in a part of his speech on Friday Sep. 9, 2017 calling the Muslim states to deport all diplomates of Myanmar.

SunniOnline quoted the eminent Islamic scholar as saying: “Regretfully the Buddhist government cruelly oppressed Rohingya Muslims. The army of Myanmar has been massacring the oppressed and defenseless Muslims.”

He termed the massacre of Rohingya “genocide” and “crime against humanity”. He said: “Massacring 3000 people within three days is very savage; it has shocked the world.”

“Killing a group of people just because they follow a different faith is cruelty and it a big crime. Muslims in the world should boycott the government of Myanmar standing together against it,” Mawlana Abdol-Hamid emphasized.

He addressed the Muslim leaders and rulers: “The Muslim states should shut down the embassies and representations of Myanmar in their countries excluding all diplomates of Myanmar.”

“The UN, Security Council and Human Rights Watch should act against Myanmar widely to forbid this country from cruelty and crimes against Muslims,” the rector of Darululoom Zahedan added more.

He concluded his points by saying: “All sides who oppose crimes and insecurity should stand against the Myanmar government. The criminal rulers of Myanmar should be given a lesson which can be a lesson for the rest criminals and oppressors of the world.”

Meanwhile thousands of Sunni worshippers carried out a rally to protect the savage killings of Rohingya in Myanmar. They chanted slogans against the government of Myanmar asking Muslim leaders to take action against it.
Some teachers of Darululoom Zahedan talked to the protestors who were chanting ‘stop killing Muslims in Burma’.