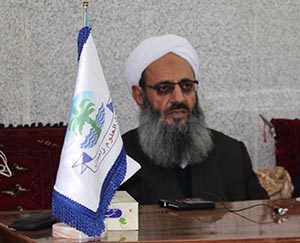 The outstanding Iranian Sunni leader expressed his regret on his absence in the conference of “Islam and counter terrorism” in a letter to the General Secretary of the Muslim World League.

A report of SunniOnline suggests, Shaikh-ul-Islam Mawlana Abdol-Hamid, who could not take part in a conference held by the MWL in Makkah al-Mukarramah, has sent a letter to Dr. Abdol-Mohsen al-Turki conveying his message to the conference.

The conference of “Islam and counter terrorism” was inaugurated in Makkah al-Mukarramah on Sunday, 22nd Feb. 2015 (3rd Jumadi al-Oula 1436) where more than 400 Muslim scholars and intellectuals took part in the conference.

Khateeb and Friday Imam of Sunnis in Zahedan thanked the GS over his invitation to the conference expressing his regret over his absence in the conference due to ‘some obstacles’.

He applauded the organizers of the above-mentioned conference and said in his letter: “The human world in general and the Muslim world in particular suffer from extremism and terrorism. The imperialist powers have assaulted on some Muslim states on the pretext of fighting with terrorism. Thus holding this conference is so vital.”

Alluding to the reasons and factors which boost extremism and terrorism in the Muslim society, Shaikh Abdol-Hamid mentioned “injustice, discrimination, tyranny, depriving nations from their rights, support of the sinister Zionist state by the US and other Western powers, autocratic stances of some Muslim states over public demands, and ignorance of some Muslims on the teachings of the Qur’an and Sunnah and their misconceptions” as the main causes of the spread of extremism.

The member the Supreme Council of the Muslim World League added more: “Disputes of Muslim states with each other have boosted terrorism, extremism and regional disputes.”

Mawlana Abdol-Hamid urged military attack for uprooting terrorism ‘does not work’; instead “freedom of the Palestinian nation”, “resolution of Muslim states’ disputes” and “formation of national and unity governments” can eliminate terrorism well.

At the end of his letter to the GS of the Muslim World League, the rector of Darululoom Zahedan proposed the organizers of the conference “to form a delegation of credible and eminent Muslim scholars and intellectuals in order to travel to different countries and conduct negotiations with political parties and wings for constitution of national and general governments.”