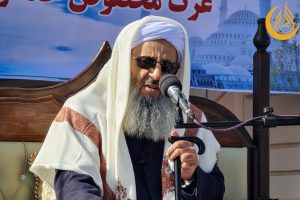 Believing that the old policies cannot meet the needs of the modern age, the most influential Iranian Sunni leader called for a change in Iran’s constitution. Amid nationwide repression in Iran, Shaikh Abdol-Hamid urged that the rules of the constitution must change in accordance with the conditions and needs of the new age and generation.

Talking to the Sunni worshipers in Zahedan, capital city of Iranian Balochistan, before the Friday prayers on January 20, 2023, the Iranian top Sunni cleric said: “We live in the age of communication. Today, all the news of the world is transmitted at a moment. In the past, people used to say that the world has become a village, but today the world has become a home. Today the new generation including the young, women, and children has more needs and expectations. Rulers must consider new conditions.”

“People of ninety and eighty-year- old cannot decide for the young. Unfortunately, our constitution has not been modified fundamentally during 44 years. The constitution should be updated in accordance with the conditions and needs of time. Those who claim to implement the Islamic rulings should consider the conditions of the present age; otherwise they will not succeed. Islam and the Qur’an have a high capacity. The holy Qur’an and the holy Prophet’s Seerah match with the conditions of the modern age,” the Friday prayer leader of Sunnis in Zahedan expressed his views.

Preventing women from education is not appropriate for any political system
Mawlana Abdol-Hamid underlined: “No political system in the world is authorized to prevent women from education. Men and women are equal in rights. Women should get knowledge in modern and Islamic sciences and serve the community as men. Human societies and governments must pay more attention to women.”

“Both men and women are human beings and belong to the same genus, but their gender is different,” he added more.

Freedom, equality and justice are the demands of the nation
Continuing his Friday speech of Zahedan, the eminent Iranian Sunni scholar said: “I would like to advise the authorities to show mercy for young people, and do not disappoint them. The young generation is full of wishes, and has so many desires to build his\her future. They protest for a good and a brighter future. Their aspirations should be met.”

“Do not take the young to jail. Have mercy on children, teenagers and women and talk to all protestors; if they are right, accept from them, and if they are wrong, convince them; but do not torture and hang them. The holy prophet, peace be upon him, had pity and compassion with people, and used to advise about them. Imitate the Seerah of the holy Prophet,” the president of Darululoom Zahedan said in his Friday sermons.

Mawlana Abdol-Hamid said: “Inequality is not in accordance with the religion of Islam and the Sunnah of the holy Prophet, peace and blessings of Allah be upon him. Freedom, equality, and implementation of justice are among common goals of governments and systems of the world. Everyone should be free to practice his\her religion, and worship Allah in his\her own way. This freedom is vital.”

Women are pioneers in learning science and education
Referring to the days of national entrance exams in Iran, the Friday Imam of Sunnis in Zahedan said: “60% of the participants in the entrance exams are women; this shows that women have left men behind in learning science and education. It has been said that women get more passing grades than men. Both men and women are talented, but women work harder.”

The Iranian top Sunni leader urged: “Everyone should pay attention to women. Young people should go to university and get the highest education. Free the students who are in jail, and if they are suspended, let them study. Do not prevent anyone from education.”

“Our young generation must study. The future belongs to those who have knowledge. Both, Islamic and modern sciences are the needs of the society,” said Imam of the Grand Makki Mosque of Zahedan.

The backwardness of the country is due to securitization of atmosphere
Referring to the increase of checkpoints in Zahedan, the most prominent Iranian Sunni scholar said: “Recently, there has been an intense security situation in our city. Seven checkpoints have reached 15. People believe that the authorities of Zahedan city should not securitize the atmosphere. The security atmosphere of our province and country has left us behind. The security pressures are against the development. Wherever there is a security atmosphere, you cannot invest there.”

“In the past, when people voted for the presidential candidates, they were told to remove the security pressures, but this has not happened. Today, the severe security pressures have intensified in Zahedan. Remove such an atmosphere, because the people themselves have been establishing security and maintaining peace,” said the president of Darululoom Zahedan.

In his last points, Mawlana Abdol-Hamid demanded the punishment of the Bloody Friday crimes of Zahedan and Khash, saying: “We hope that the rank of these martyrs will be high. These martyrs were oppressed and shot by weapons. The perpetrators of these crimes must be punished.”

He also forbade the protestors from hate speech and insult in their slogans.