‘No State Can Maintain by Weapon & Force’ 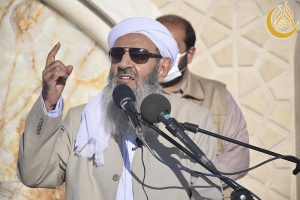 After three months of anti-government demonstrations by the public in Iran that led to the massacre of Friday worshippers in Zahedan and Khash by military forces, the Iranian top Sunni leader warned of the consequences of people’s dissatisfaction with the state.

He said: “The survival of every political system and state is to hear the voice of the people and get their satisfaction. The Islamic revolution of Iran lasts until people want. This revolution won when people rose up and the scholars, academics, and marketers supported it.

Talking to the people of Zahedan in the Iranian Balochistan on December 23, 2022, Shaikh Abdol-Hamid said: “The Islamic Republic has not triumphed with military coup and by force, but with the support of the people. People wanted freedom, justice and solving their economic problems. They wanted to determine their fate themselves. It is always said that the revolution lasts until people want and support it.”

Believing that weapons cannot maintain the system, the Friday prayer leader of Sunnis in Zahedan stated that the officials cannot rule the country by using of force and power and with arresting, imprisoning, threatening, and killing, but by the support of the people.

“No government can last without getting people’s satisfaction. We believe that officials and the state leaders should sit with the nation and meet their demands,” he added.

The most influential Iranian Sunni leader warned of the consequences of issuing death penalties against some demonstrators, saying: “Allah Almighty says: “Whoever slays a human being for other than murder or mischief in the earth, it is as if he had killed all people, and whoever saves a life it is as he saved the life of all mankind.” How much this sentence is beautiful! When a mankind is killed, the murder in the world is prevalent. It is hard to commit crimes at first, but when one does it, it becomes easy and common, and everyone says, why I do not do it. When you save someone from death, you have prevented a slaughter and murder.”

The president of Darululoom Zahedan referred to the greatness of the Islamic culture in dealing with people, and said: “In Islam, the sanctity of all human beings should be preserved, regardless of their belief, faith, and culture. When a Muslim violates the right of a non-Muslim, this is agonizing to me. When we claim that we have Islamic civilization, and claim to follow the Prophet Muhammad, peace be upon him, we must not commit cruelty against humans and even animals.”

‘We have a beautiful and great teaching, but unfortunately, we have been away from it’, he added more.

The answer to stone is not a bullet
The Iranian top Baloch leader urged on hearing people’s voices and meeting their demands, saying: “The voice of protesters should be heard. As Iranian citizens, we are one nation. The unity is our common goal. National security creates national unity. Armed forces and all officials and masses are Iranians. We need to respect each other’s rights. In national protests, no one is allowed to kill the military and security personnel, and neither are they allowed to kill people. We are all Iranians and our blood is one.”

The Friday Imam of Zahedan further stated: “The response to stone is not bullet. Problems will increase as long as there is murder, execution, and brutality. We should maintain the sanctity of all Iranians. All those who are killed on both sides, are Iranians. The people of Iran are wise and smart; solve their problems with respect and courage. We have to sit with the people and meet their demands. This is the wisest way. What Allah wills, will happen, nothing else.”

Justice, freedom, and people’s satisfaction are more important than an Islamic system
The most outstanding Iranian Sunni scholar continued his Friday speech of Zahedan, and said: “Islamic government is good until the majority of people want it. The religion is before the government. What is important is the protection and survival of the religion. The religion should not be sacrificed to the government. Islam has been present and will be lasting, but governments decay. The Islamic state should not spend from religion for its survival, but it must be the cost of religion to protect it.”

“The Islamic state is good until the majority of people want it. If justice and freedom are implemented, the system remains for a hundred years and more. The holy Prophet, peace be upon him, ruled for 10 years, and if government was important, Almighty Allah would have given to the Prophet thousands of years to rule. Justice, freedom, and satisfaction of the people are more important than Islamic state. Caliph Ali, may Allah be pleased with him, said the government does not value for me as much as mosquitoes worth. Ali and all the Rashidin Caliphs ruled poorly and did not collect wealth, but they were the best role model,” said the Iranian Sunni leader of Zahedan.

“People did not escape from the Prophet, peace be upon him, and his companions. The officials should consider it. If I make the people’s pessimism, this is an unforgettable sin. If the scholars of both Shia and Sunni Muslims, and the Islamic governments of the world cause people to hate Islam, this is an unforgivable guilty. Inspire people to Allah’s mercy and do not strict them in religious offers. People should not be pessimistic about the religion of Islam,” said the Friday Khateeb of Zahedan in the presence of tens of thousands of people.

The biggest capital of every nation is human resources
Mawlana Abdol-Hamid emphasized the need to pay special attentions on human resources and said: “Human resources including artists, scientists, and professionals are our capital. Developed countries develop with their nation. Our country has paid costs for students, but a large part of these masterminds and educated people has emigrated. The country needs these people. We should pave the way for them to return to the country. With one dollar costs 400,000 IRR, they will not return. Our economy must develop. That is why people cry in the streets.”

Referring to the new statement of the Taliban government on banning female students from universities, the president of Darululoom Zahedan said: “Afghan women’s education is the demand of all scholars of the Islamic world. “Women are the wealth of the nation. I would like to say to the neighboring country of Afghanistan and ask the leadership of the Islamic Emirate of this country to open the doors of all educational centers soon. It is not only the demand of Europeans and Americans, but also the demand of all scholars of the Muslim world.”

“Science is not limited only to male or female. Men and women should learn modern and Islamic sciences. Oil, mines, and fertile lands are not Afghanistan’s real capital, but its most important capital is its human resources,” he believed.

No ruler can issue death penalties beyond Shari’ah rulings
Regarding the violent treatments against the recent prisoners, and issuing severe penalties against demonstrators, the most influential Iranian Sunni leader said: “I would like to call on the officials to put an end to pressures, tortures, executions and accusations of moharib\warriors against protestors. There are reports (mistreatments against women prisoners) that cannot be said. I sometimes think which law permitted them to issue such sentences!”

“Rulers, judges, and all officials can work within the framework of Islamic rule of law, not beyond it. No detainee should be beaten or forced to confess. No one should be killed until he does not commit any murder. Rulers cannot order above God’s decree,” Mawlana Abdol-Hamid underlined.

He continued: “In our country, the law is above everything; no one can act beyond the law. I am surprised that some people say that the ruler can issue any order he deems fit: this is not in the beliefs of Sunnis. According to Sunnis, the holy Prophet, peace be upon him, cannot issue rulings by himself, but what the Prophet says is said by revelation.”

“No ruler can issue an order to kill someone without the permission of Shari’ah. The rulers of Muslims at any level they are should act within the framework of Islamic Shari’ah. There is no expediency in the world higher than the expediency and benefits of Islam. Expediency of the system must be within the framework of Islam,” said the Imam of the Grand Makki Mosque of Zahedan.

Let the soldiers stay in the barracks
Referring to the Bloody Friday incident in Zahedan, Shaikh Abdol-Hamid said: “We are wondering why the worshipers were shot in the incident of Bloody Friday. The people of Zahedan always remind me that the incident should be followed, and the murderers must be punished. A court has been established, and the case is going on.”

The eminent Iranian Sunni leader insisted on fulfilling people’s demands, urging that the security forces should not kill people, saying: “We are Iranian citizens. Do not shoot the citizens like this. No government shoots its citizens like this. Let the soldiers stay in the barracks and refrain from hitting people. If someone kills a soldier or a Basiji force, you will avenge him. On the other side, you must also take revenge on the officer who kills people.”

“I request all Iranian protestors to protest peacefully and not to damage people’s property and avoid attacking forces,” he said.

Shaikh Abdol-Hamid demanded: “Release masses, elite and political prisoners. Loosen the thread. Talk to these people, hear them, and fulfill their demands.”

Regarding the pressures against Sunni scholars amid nationwide protests, the president of Darululoom Zahedan said: “Famous scholars and directors of Baluchistan’s seminaries held a meeting in Darululoom Zahedan and issued a statement about the recent problems. We hope that the scholars who were summoned and arrested will be released, and the summons will be canceled.”

At the end, Shaikh Abdol-Hamid asked Mawlana Gorgij to respond to the people’s request and resume leading Friday prayers after a year.