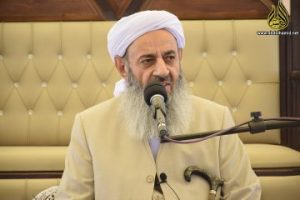 Shaikh Abdol-Hamid was talking to tens of thousands of people in Zahedan’s biggest Friday gathering on Dec 9, 2022.

Warning the authorities that hanging demonstrators would not stop the ongoing protests, the Iranian top Sunni leader raised the issue of death sentences against some protesters, referred to the execution of Mohsen Shekari in Tehran, and said: “I saddened when I heard about the execution of Mohsen Shekari. It is forbidden to kill someone who only blocked the streets, wounded a security agent with a knife and did not commit a murder. Even if they are warriors, imprison or exile them.”

Why don’t you deal with the police officers who shot the protesters?
The Friday Imam of Sunnis in Zahedan continued his speech, denouncing killing of demonstrators, and said: “When the Iranian football team lost, people came to the street and police officers killed one person with a direct shot, why you didn’t retaliate against them? Many demonstrators have been killed just because they chanted slogans. What crime did those who were killed in Zahedan’s Musalla commit?”

“You have sentenced five people to death for killing a Basij force. Why don’t you deal with police officers like this when they kill protesters? “You are the ruler and these are your people. There should be no difference between the officials and the nation. All should be treated equally. You have not arrested the officers who killed innocent people in Zahedan and in other cities, you have not avenged the murderers,” said the president of Darululoom Zahedan.

“Executions in Iran are against the orders of Allah and international laws,” Shaikh Abdol-Hamid believed.
“We object because we have specialization in Shari’ah issues,” he added more.

Killing nation is a blunder
The eminent Iranian Sunni leader emphasized the governments of the world not to kill their people and said: “The holy Prophet, peace be upon him, said that if I kill the hypocrites who harm us and help the enemies against us, people will say that Muhammad kills his own nation. How can he be faithful to us when he is not loyal to his own nation?”

“The people of the world should know well that killing the nation is not allowed in any way. The holy Prophet, peace be upon him, did not kill even one of the captives of the Badr Battle and freed all of them. This treatment of the holy Prophet affected the world and all the Arab tribes,” said Imam of the Grand Makki Mosque of Zahedan.

Women should show their ability in different fields
Regarding women rights, Iran’s top Sunni cleric stated: “Some people say that you are talking about women’s freedom and rights, what have you done for women? We have always followed this issue. Baluchistan is a traditional region. In the past, women did not use to participate in the elections; we pushed them to the elections. Darululoom Zahedan allocated a dormitory for female students of colleges and universities, providing free accommodation for them. Sunnis have been supporting women candidates in elections.”

“We want women to become jurists and expert in the exegesis of the Qur’an, go to university, and get education. We advise all Muslims not to prevent women of knowledge and education. Women have the right to study and gain expertise. We have many educated and capable women. At the period of the reformists, I emphasized the officials to give women their due rights. Many Shia and Sunni seminaries show laziness regarding women’s rights,” said the Iranian top Sunni leader.

“Women should become ministers and hold high positions. This is my belief. Women in our region have made many efforts in scientific fields. We have proposed to the Ministry of Foreign Affairs to appoint female ambassadors. I believe that women should show their ability in different fields,” Shaikh Abdol-Hamid underlined.

Regarding the economic pressures on the people, he noted: “After many years, Iran’s nuclear case has not been resolved yet. People are hungry, and they are under severe economic pressures. Now they protest. Take the example of Hudaybiyyah peace treaty. The founder of the Islamic Republic of Iran when saw the Iran – Iraq was going against the interests of Iran, he signed a treaty of ceasefire and ended the war.”

Even if the protesters revile, hear them, and do not kill them
The president of Darululoom Zahedan went on to say about peoples’ pains. He said: “The nation has problems, listen to these protesters, and negotiate with them. Beating, killing and executing the nation is not a good act. Protests will not stop by killing people. The people made a revolution and brought you to the power. Even if they revile, listen to them.”

“The ruler must admit his mistakes. Solve problems in the framework of logic and reasoning. Beating and killing people and accusing them as warier is not the solution”, he added more.

“We hope that the students’ problems will be solved as soon as possible. I would like to advise the officials to sit with the students and consult with the experts”, he underlined.