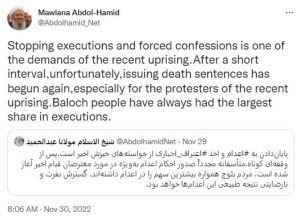 Following the continuation of nationwide anti-government demonstrations in Iran and issuing of capital punishment for some protestors and hanging many prisoners, the most influential Iranian Sunni leader asked the Iranian officials not to repress, torture, and kill the people, but listen to them with love, sympathy, and respect.

In his tweets, Shaikh Abdol-Hamid described the situation of the Kurdish people ‘serious’. He praised Kurds and Baloch people for their patriotism and for protecting the borders of the country.

The Friday Imam of Sunnis in Zahedan also expressed his concern about the resumption of executions in Iran, saying: “Baloch people have always had the largest share in executions.”

Shaikh Abdol-Hamid’s tweets had many reflections on the social media.

“The spread of hatred and dissatisfaction will be the certain result of these executions,” he added more.

The outstanding Iranian Sunni scholar said in another tweet: “The dear Kurds of Iran have endured many tribulations such as severe ethnic discrimination, drastic religious pressure, poverty and economic problems; is it fair and just to respond to their protests with war bullets?”