We Negotiate & Interact, but Don’t Compromise 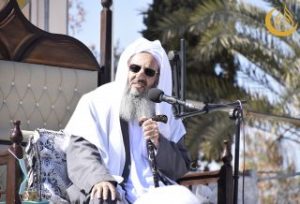 Referring to the nationwide protests of November 2019 against hiking the price of fuel, the most influential Iranian Sunni leader honored the memory of those killed that year. He referred to the trip of leadership’s delegation to Sistan and Baluchistan, and said: “We believe in dialogue and negotiation, and we do not reject it, but we do not compromise on the issue of the Bloody Friday.”

Shaikh Abdol-Hamid was talking to tens of thousands of people in Zahedan’s biggest Friday gathering on Nov. 18, 2022.

The Friday Imam of Zahedan alluded to the recent trip of the Supreme Leader’s envoy to Sistan-Balochistan regarding the Bloody Fridays of Zahedan and Khash, and said: “A delegation has been sent to Sistan-Balochistan by the Supreme Leader to deal with the issue of the Bloody Friday of Zahedan and Khash. The people expected the delegation to come to Darululoom Zahedan to negotiate and condole, but they did not come; this was the request of the families of the martyrs and the request of all. This is the custom of the world that in order to solve any case or problem, the mediator and peacemaker should go to the affected people and condole with them, and listen to them. This was not my wish, but the wish of all people. People’s expectations were not met.”

He continued: “They were our guests, and we will never disrespect or insult the guest. However, we met with the envoy and conveyed our message to them in a house. We said that people do not look at the promises, but they look at the acts and performance.”

“In the past, we used to appreciate the officials for their good actions, and we will continue it in the future if they carry out any good act. The delegation’s job was to deal with the incident of Bloody Friday in Zahedan and Khash not more than this. The issues such as discrimination and lack of freedom, which are common among all Iranians including ethnic and religious communities, should be addressed at the national level,” said the president of Darululoom Zahedan.

He further said: “Some people have prejudiced that we were going to compromise with the state representatives on the blood of the martyrs, while we will not give up our rights; neither by threats and coercion nor by alluring. We will never surrender; neither by threats nor by coaxing. If they give us the entire world, we are not ready to compromise. We do not ignore the facts. We consider everyone’s right; even we do not want to violate the right of the enemy. These prejudices and assumptions were wrong.”

All Iranians want freedom and justice
The top Iranian Sunni cleric said: “Today, the protests have spread all over the country. The protests of 2019 were because of fuel, but actually, fuel was just an excuse to bring people to the streets. In fact, people’s dissatisfaction with the government made them come to the streets. If we investigate what people want, we will find that they want justice and freedom. Women, youth, and different classes of people protest for freedom. It shows that people are under severe pressure and seek justice and freedom.”

“Freedom is very important. Just as people need food and necessities of life, they need freedom, too. We feel that people are suffering from discrimination, inequality, and oppression on a large scale,” Shaikh Abdol-Hamid believed.

Sunnis have been suffering from discrimination for 43 years
The Friday prayer leader of Sunnis in Zahedan: “Sunnis have an unbreakable tie with all Iranians. They have been suffering from discrimination for 43 years. Since the victory of the revolution, Iranian Sunnis have pursued their rights through dialogue and negotiation, and by participating in elections. In pursuing their demands, the Sunnis of Balochistan, Kurdistan, Khorasan, Golestan, and the south were united.”

He noted: “We are not saying that the Sunnis did not have freedom at all, but they endured severe pressures. All the people of the country endured pressures.”

“The cruel decision of the Supreme Council of the Cultural Revolution was a great experiment. This council increased religious pressures and aimed to make decisions for Sunnis from elsewhere. Its resolution was against Article 12 of the Constitution and was cruel. Many scholars were imprisoned and suffered a lot of pressure. Too many letters were written and many follow up were done, but they were unsuccessful,” said the Iranian Sunni leader.

Mawlana Abdol-Hamid urged: “Sunnis are the largest branch of the Muslim community in the world. How do you take away their freedom and give the management of their seminaries in the hands of others? The management of Sunni religious affairs must be in their own hands.”

He complained: “In many cities of Iran, Sunnis are not allowed to build mosques. In the earthquake of Bam, 3,000 Baloch people were killed, but they had no even a single mosque there. In Kerman, Yazd, Isfahan, Tehran and other metropolises, we are not allowed to build mosques. People pray in prayer-houses and private places with fear and severe pressures of security forces. Where in the world do people behave like this? Whenever we talk about mosques, they say that you have so many mosques in the country. They even count the mosques in the villages, but they do not say how many mosques Sunnis have in Tehran and big cities.”

Shaikh Abdol-Hamid stated: “I swore Allah that it is in the interest of the Shia community to allow us to build mosques.”

“The Sunnis have been deprived of key positions at the provincial and national levels. When we raise this issue, some say that you have city governors in some areas, while this has been very limited. We have not even had a provincial governor or a minister since the revolution. Some of the officials don’t know these things. We have told the officials to appoint Sunnis, women and ethnic communities as ministers. Women have been suffering from discrimination for 43 years, and it is not exclusive to Sunnis. Women have not had the place they deserve”, said Imam of the Grand Makki Mosque of Zahedan.

The country cannot be governed without pluralism
Shaikh Abdol-Hamid continued: “Academics complain that intellectuals and capable people who grew up in universities face discrimination. Those who pretend to be Muslim and go to mosque and participate in the state-run processions and religious ceremonies are accepted in the selections. If capable people were engaged regardless of how they worship, we would not have witnessed such problems today.”

“I have already said: if there are people who are weak in practicing the religion, but have conscience, let them serve the community. The country cannot be governed without pluralism. Creating restrictions for political activists and parties is against the national interest. There is no partisanship in the country, and there are no influential parties or organizations to criticize and explain the state of the country,” said the most outstanding Iranian Sunni scholar.

He believed: “Economic problems are rooted in political issues. Political problems have made women and students, young people and the new generation and different groups raise their voices.”

The authorities must submit to the will of the nation
Mawlana Abdol-Hamid stated: “The authorities should talk to protesters all over the country. Nowhere in the world, protesters are responded with bullets and prison. I have been a critic in the past, and the authorities know that I am a well-wisher. So far, no one from the decision-maker officials has asked me to explain the problems to them. I am sure that the authorities do not talk to the frank critics and protesters. You should have talked with those who are now political prisoners.”

“There is no hearing ear in the country. Iranian people have been shouting for almost two months. Hear their voices. Free the prisoners. Those who were arrested in the recent uprising and those who went to prison in 2019 should be released,” said the president of Darululoom Zahedan.

“We must submit to the will of the nation and not let the situation become more critical day by day. People should not hate scholars more,” Shaikh Abdol-Hamid underlined.

“New acts like tossing turban in the country have worried the clerics. This is a sign that people are upset with Ulama, and they want their support,” he said.

“Peaceful protests are the right of the people. None of the protester has the right to attack private or public properties, and protests must be peaceful. We must be careful not to kill people. We must open the door of negotiation to all,” he underlined.

Russians should end the war in Ukraine as soon as possible
The Friday prayer leader of Sunnis in Zahedan pointed to Russia’s attack on Ukraine and said: “War and killing people are not in the interest of any government. Russia’s war on Ukraine and the killing of the oppressed people have caused great damage to the Russian people. People worldwide hated Russian society. As a well-wisher, I recommend that the Russians must end this war as soon as possible and withdraw their forces from Ukraine.”

The security forces should be with the people
“I’d like to advise the officials and security forces: your advantage in the past was that you and the state were public. We should always be with the people and pay attention to them and never kill them. The killing of children in Izeh\ Khuzestan was very shocking. Unfortunately, we see scenes like this in different parts of the country,” the Iranian top Baloch political leader expressed his concerns.

Mawlana Abdol-Hamid defended the students of universities and addressed the Iranian officials: “Again, I emphasize that you allow the students you suspended to return to universities. Students are our hope in the future. The future of the country is in the hands of these students and academics. Women should be treated with respect. I cherish the memory of those killed in 2019.”

People want you to free Mawlana Kohi
“Mawlana Kohi was arrested in 2019 when he defended fuel protesters. He is one of the political prisoners and sympathetic scholars of the country; he should be released so; he has been a well-wisher critic.”

“Now, Shaikh Kohi is on hunger strike in prison because his parole was not accepted. Some conditions and restrictions have been set for him, but he refused them, and it caused his imprisonment to continue. It is the demand of the people that Mawlana Kohi should be released soon,” said Shaikh Abdol-Hamid in his last points.