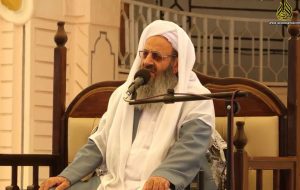 Talking to the people of Zahedan, capital of Sistan-Balochistan, before the Friday prayers on August 12, 2022, Shaikh Abdol-Hamid alluded to the impact of the noble teachings of Islam in humans’ life and strongly forbade Muslims from disobedience to the divine commandments and from immoralities.

“If we compare the noble teachings of Islam with the programs of other religions and cultures, we will definitely find that Islam has more comprehensive, broader, and a better program for making human’s life than other communities and civilizations. Islam guides humanity to monotheism, creed, and best practice of life,” said the president of Darululoom Zahedan.

He continued his Friday speech of Zahedan: “Islam has put prayers and Zakah at the top of its programs. Prayers are supplication with Almighty Allah; Zakah is the biggest financial act of worship that has the highest virtue. After the rights of Allah, the Qur’an emphasizes the rights of parents and insists on establishing kinship relations, caring for orphans, the poor, and the needy and prisoners.”

“Islam emphasizes on truthfulness, honesty, trustworthiness and forbids betrayal and breaking promises. Islam is the religion of honesty and veracity. In Islam, honesty in deed and action is one of the biggest pivots of the religion. Islam has taught us honesty, trustworthy and pity and forbade us from violation of the rights of others and from breaking someone’s heart, because breaking people’s hearts and oppressing them, cause Allah’s punishment,” said the Friday prayer leader of Sunnis in Zahedan.

“Islam is the enemy of hypocrisy. Once the Prophet, peace be upon him, was enumerating the major sins and said: Polytheism is the biggest sin and then disobedience to parents and after that lying is the big sin. Tell the truth, because the truth saves us and avoid lies, because lies destroy lives,” he added more.

The prominent scholar of Iranian Balochistan went on to say: “Islam forbids from lies, hypocrisy, hatred, murder, bribery, usury, oppression, theft, corruption and drinking alcohol, which destroys the intellect. A person who drinks alcohol may commit murder and all kinds of vices. Islam recommends us to carry out good deeds and avoid immoralities.”

“What Islam prohibits is for the benefit of humanity and is in accordance to common sense. It is not difficult to follow the teachings of Islam; Islam commands moderation, and it is against extremism,” Shaikh Abdol-Hamid believed.

“Unfortunately, many Muslims have not understood the religion well and act in a way that causes people to misunderstand and misguidance. While Islam has the best and most moderate and comprehensive plans for mankind; the programs that lead to salvation and reaching Paradise and Jannah”, said the Imam of the Grand Makki Mosque of Zahedan.

The progress and dignity of Muslim women is in Islamic clothing
The most outstanding Iranian Sunni leader mentioned the Islamic hijab as a great value for women and said: “Islam emphasizes on women to observe complete clothing and considers hijab as a value for them. Alas! Some people in the world do contradictory things; when a large part of a woman’s body is naked, no one criticizes it, but when a woman’s head and body are covered, many consider it as a shame.”

“Many consider women’s nudity as a factor of progress and wearing hijab as a factor of backwardness; while the progress of women is with science and education, not in nudity. Women’s honor, respect and dignity are in dressing and covering their body”, said the Iranian Sunnis’ leader in his Friday sermons of Zahedan.

He urged: “A woman should not appear with incomplete clothes before anyone, but only before her husband, who can see her makeup and beauty. When a woman goes to university, school and bazaar, she should not wear tight clothes and use light makeup, but should wear normal cloths with no makeup when appearing in such social arenas.”

Shaikh-ul-Islam Mawlana Abdol-Hamid concluded his speech, saying: “The religion of Islam does not prevent progress; rather Islam inspires all classes, including women, to make progress, acquire knowledge, and learn wisdom.”