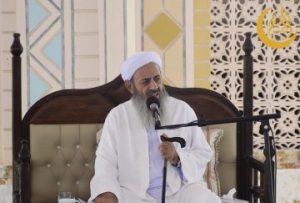 Criticizing the mass execution in Iran, especially in the province of Sistan-Balochistan in the recent days and months, the most influential Iranian Sunni leader urged on reviewing criminal laws of the country. He thought mass executions based on the criminal codes were contrary to the spirit of the Islamic principles.

Talking to tens of thousands of worshipers in the Friday gathering of Zahedan on June 10, 2022, Shaikh Abdol-Hamid said: “There are some laws that need to be reformed and amended especially the laws related to criminal punishments”.

President of Darululoom Zahedan continued his speech by saying: “I do not object to the laws of retribution because retribution is the command of Allah Almighty; no one can object to this. However, other laws, such as the penal laws must be amended according to some Islamic schools of thought.”

“Sentencing people to death is a loss to the nation and the country; we hope that the authorities will think about this problem and will solve it as soon as possible,” he added.

“As a benefactor, not a foe, I would like to advise the Iranian officials to review the penal codes. I believe that many criminal codes of the country are not in accordance with Islam. Many criminal laws need amendment; this is in the interest of both the rulers and the nation,” said Imam of Grand Makki Mosque of Zahedan.

“The nation is the main pivot in the country. Satisfying the people and answering their demands should be one of the most important policies of the country,” he believed.

Reforming community was responsibility of all prophets and righteous people
Insisting on performing the duty of enjoining the good and forbidding the evil, the most influential Iranian Sunni leader described sins, negligence, and disobedience to the divine commandments as the main cause of calamities, pests, and anomalies and stressed for reform activities in the society.

President of Darululoom Zahedan said: “Throughout history, benefactors and well-wishers forbade people from committing sin and immoral acts and behaviors in the light of the divine commands. Today the World Health Organization has various programs to combat physical and outward pollutions.”

“Just as the WHO was founded to promote health and combat diseases and viruses in order to keep the world safe from physical pollutions and illnesses, there should also be an organization to combat spiritual and inward pollutions,” said Shaikh Abdol-Hamid in his Friday remarks in Zahedan.

“Unfortunately, today people do not have any program to develop their spiritual and moral affairs. As spiritual pollution is the source of all pests, calamities and diseases, we should also work to clean our heart from inner flaws and faults,” he added more.

The Friday Khateeb of Zahedan continued: “Physical contaminants threaten health of the body, but spiritual contaminants such as usury, adultery, sin, oppression, bribery, immorality, etc. threaten the soul and body and endanger human life. Therefore, experts in religious affairs should warn the people about the consequences of spiritual pollution.”

“Make no mistake! Sins not only affect the sinner him/herself, but also infect the whole society, spread corruption and increase social crises. It is dangerous to disobey Allah’s commands in performing regular prayers, paying zakah, and reforming the community. Reforming the community is the duty of each of us and it was the responsibility of the prophets and righteous people,” said Mawlana Abdol-Hamid.

The most outstanding Iranian Sunni scholar further referred to the traps of enemies against Muslim communities, saying: “Today, the false religions and sects are constantly trying to misguide people from the path of truth. They are planning for women, young generation, students and different classes to mislead them and achieve their sinister goals. Some attack the modesty of chaste women and mislead them in cyberspace with evil tricks.”

He continued: “Some organizations have launched widespread propaganda against Islam through virtual networks and satellite TV channels, making people suspicious of Islam. Muslims must be vigilant, follow the teachings of the Shari’a, and do their best to promote and spread the noble teachings of Islam and the prophet Muhammad PBUH.”

Blasphemy is not freedom, but chaos
Following the insulting remarks against the Prophet Muhammad, peace and blessings of Allah be upon him, and Islam by some leaders and spokespersons of India’s ruling party (BJP), the most influential Iranian Sunni leader strongly condemned such blasphemous remarks, calling them contrary to the common sense and a tool of chaos in the world.

Shaikh Abdol-Hamid said: “In India, some high profile members of the ruling party, which is an extremist party, have insulted the Prophet Muhammad, peace and blessings of Allah be upon him. Muslims in India have been under pressures and they have been suffering from various problems in this country since this government and party came to power. India has been one of the democratic and good countries in the world. Its previous leaders were moderate, but unfortunately this extremist government has extremist leaders.”

“No common sense in the world allows blasphemy to any nation, sect, or religion. As Muslims, we must not insult the sanctities of any religion, sect, or community or offend any great personality. Even we are not allowed to insult idols,” said the Friday prayer leader of Sunnis in Zahedan.

“I wonder, despite the claims of civilization, why some people commit anti-civilization and anti-culture behavior in the globe and offend the sanctities of others,” he expressed his concerns.

President of Darululoom Zahedan continued: “We strongly condemn the insult to the Prophet Muhammad, peace be upon him, and expect the Indian leaders and its people to deal with the blasphemers”.

Concluding his points, the prominent Sunni scholar of Iran said: “Once, one of the British prime ministers said: Because there is freedom of speech in our country, we cannot deal with those who insult the sanctities of Muslims. I say that this is not freedom but corruption root of chaos; because blasphemy is not allowed in any community.”

“All people of the world must stand against such acts,” Shaikh Abdol-Hamid urged.

“Learn Islamic and modern sciences for the prosperity and progress of your life in this world and the hereafter. Learning knowledge and getting education is vital for both men and women. Life will be pleasant, comfortable, and prosperous when we have knowledge and information,” said Shaikh Abdol-Hamid in his last points.