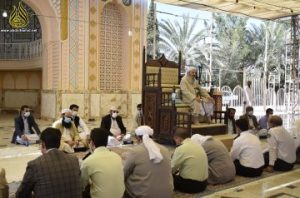 Criticizing the governments and governing systems of the world for their interference in people’s religious affairs and tenets, the most influential Iranian Sunni leader described religious affairs as personal matters of the people and called on for justice and equality.

Shaikh-ul-Islam Mawlana Abdol-Hamid was talking to tens of thousands of Sunni worshipers before the Friday prayers in Zahedan’s Grand Musalla on June 3, 2022.

He said: “Many governments want to intervene in each and every matter of people, while such interventions damage their fame and systems. Religious issues and the matters that are depending on belief are personal affairs of people; governments should not interfere in such matters.”

“People should have religious freedom, freedom of speech and press and should have freedom to criticize. In a society where people are not allowed to criticize, that society will be plagued by corruption and various problems,” said the Friday prayer leader of Sunnis in Zahedan.

President of Darululoom Zahedan continued his speech by saying: “Criticism compensates for shortcomings and builds societies. Islamic and non-Islamic states must endure pressures and hardships and strive to implement justice; it maintains security and ensures freedom of people. The Prophet Muhammad, peace and blessings of Allah be upon him, carried out the divine commandments and rulings in such a way that there was no injustice, bribery, corruption and oppression at his time. The Prophet trained the people in the best way.”

“Islam brought fundamental changes in communities, secured the world, and united people through justice and equal treatments. Justice is an obligation in Islam; even some Islamic sects have made justice as one of the principles,” the eminent Sunni scholar of Iran expressed his opinions.

“In order to bring peace and security, justice must be implemented and all classes of the people must be treated equally,” he believed.

He added: “Justice brings peace of mind and intellect, and brings security in all individual affairs. Injustice is against the interests of people and causes pests, insecurity, plagues and various types of problems in the world.”

‘As human beings, we have a duty to observe and respect the rights of Allah and people fairly’, he underlined.

The most outstanding Iranian Sunni scholar counted the anxieties and crises of the world as the result of injustice and inequality by saying: “All kinds of sins and crises such as disbelief, polytheism, oppression, corruption, and disobedience to Allah’ commands are among unjust behaviors of the people of the world.”

‘Ignoring the commands of the noble Qur’an and teachings of the Holy Prophet PBUH is a big oppression and injustice that people are involved in nowadays’, he believed.

Shaikh Abdol-Hamid further criticized violation of the rights of families, neighbors and all members of society and said: “Today, human rights are being violated in the society; the rights of parents, children, relatives and neighbors are neglected. The rights of religious and ethnic minorities are not respected and, mostly the majorities that are in power violate the minorities’ due rights. Injustice is the reason that causes such violations.”

“The Holy Qur’an addresses all governments, systems of the world and the nations to adhere to justice. According to justice, governments which are in charge of people’s affaires, must give people their freedom, respect their rights and treat them well,” said the Friday Khateeb of Zahedan.

Allah and people are two pivots for all governments
The Iranian Sunnis’ leader considered Allah and people as two axes for all governments and systems of the world to remain safe and said: “All countries and systems of the world, including Islamic and non-Islamic systems and countries must work for the welfare, security and prosperity of the people”.

“Iran, Afghanistan and all countries of the globe should consider Allah and people as two pivots in all circumstances and should satisfy people in the light of the rule of Islamic laws,” Shaikh Abdol-Hamid urged.

Imam of the Grand Makki Mosque of Zahedan added more: “Some claim that in non-Islamic systems only people are considered as pivot and in Islamic systems only Allah is the pivot; I do not accept this division and viewpoint, because as Allah Almighty should be a pivot for all systems, He has also made the people as another axis. Therefore, both Allah and people should be considered as two pivots for all governments and regimes.”

Referring to the summer vacation of public schools, Mawlana Abdol-Hamid called on parents and heads of families to plan for their children’s vacation and enroll them in Islamic schools and religious centers in order to teach them the holy Qur’an and the basic Islamic knowledge in summer courses.

He emphasized on learning religious and academic sciences and strongly criticized dropping out from schools and engaging in other jobs.