Shaikh Abdol-Hamid’s reaction to the collapse of Abadan's Metropol Tower: 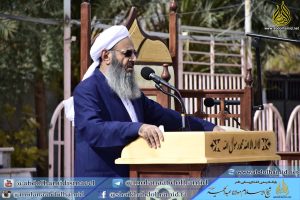 Criticizing the authorities for ignoring the experts’ warnings about the danger of the collapse of the Abadan’s metropol tower, the most influential Iranian Sunni leader expressed his condolences to the families of the victims and called on the authorities to take immediate action in order to solve the problems.

Shaikh Abdol-Hamid insisted on fair and just treatment with all Iranians.

Talking to tens of thousands of worshipers in the biggest Friday prayer ceremony of Zahedan, on May 27, 2022, the most influential Iranian Sunni leader noted: “In the incident of the collapse of the Metropol Tower, the negligence of the managers and authorities to the warnings of the experts about the possibility of the collapse of this building has worried the people of Iran”.

“Unfortunately, in our country, the rules are sometimes neglected and some people break the laws because of their relations with the officials; the accident of the fall of Abadan’s metropol tower is one of these cases,” the Friday prayer leader of Sunnis in Zahedan expressed his concerns.

“The law must be applied equally among all classes of society. Even it should be applied to authorities and those in power, as the Caliph Ali, may Allah be pleased with him, presented in court and accepted the judge’s verdict against himself”, said the president of Darululoom Zahedan.

“I hope that the authorities will confront injustice and inequality and will respect the rights of all Iranians regardless of their affiliation to any party or tendency,” the eminent Sunni scholar of Iran stated.

‘Establishing justice brings unity, peace, and security in the country’ he believed.

“As a well-wisher, I’d like to advise the administration of Mr. Shahbaz Sharif and other Pakistani officials to manage and resolve the problems of Balochistan through political means. The problems of Balochistan cannot be resolved through murdering and detaining people. The killing of people in these tensions hit both Pakistanis and Muslims around the world,” said Shaikh Abdol-Hamid in the Friday gathering of Zahedan.

“As human beings, we must feel compassion for all people of the globe. All human beings have human brotherhood with each other, and the people of Pakistan have human, Islamic and patriotic brotherhood with each other. Therefore, the loss of one side is the loss for the both sides,” the prominent Baloch leader of Iran addressed the Pakistanis in the Friday prayer ceremony of Zahedan.

He urged: “Debate is the best, safest, and nearest way to solve the problems of Balochistan in Pakistan. We recommend the two sides to solve their problems through negotiations and peaceful political ways.”

The people of Sistan-Baluchestan want the officials of the Islamic Emirate of Afghanistan to solve Hirmand water problem
Pointing out to the water crisis in Zahedan and Sistan region, Shaikh Abdol-Hamid said: “Drinking water of Zahedan and Sistan is supplied from Hirmand River. We heard that the water of the Hirmand River is going to run low; if this water is cut off from Afghanistan, the people of Sistan will face serious problems in agriculture lands.”

“We ask the officials of the Islamic Emirate of Afghanistan to think about the drinking water of the people of Zahedan and Zabol,” Imam of the Grand Makki Mosque of Zahedan addressed the Taliban’s government.

“Although our dear brothers and sisters in Afghanistan are suffering from shortage of water , but the people of Iran –who are relatives and neighbors of Afghans – want this water to be divided between both Iranians and Afghans”, he demanded.

‘I hope that the officials of the Islamic Emirate will respond positively to this request’, Shaikh Abdol-Hamid concluded his points.