Iran's Sunni leader in the Eid-al-Fitr prayers ceremony of Zahedan:

IR Sunnis should Decide for their Religious Affairs without Officials’ Interference 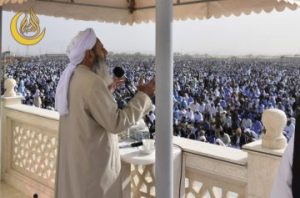 Calling on the Iranian authorities for the rights of the Sunnis of Iran, the most influential Iranian Sunni leader insisted on complete religious freedom and on a fair distribution of official positions. He was talking to more than three hundred thousand worshipers in Zahedan on May 2, 2022 before offering Eid al-Fitr prayers.

Mawlana Abdol-Hamid criticized discriminatory behaviors against Sunnis in Iran and believed that the country’s official positions should be distributed equally among all Iranians, regardless of their religion, sect, faction or ethnicity.

Insisting on religious independence, the Friday Khateeb of Sunnis in Zahedan said: “However, we do not deny existence of religious freedoms in the country at all, but in many cities Sunnis have been enduring severe religious pressures, obstacles and discriminatory behaviors”.

President of Darululoom Zahedan noted: “We respect the constitution, the laws and regulations of the country and according to the constitution we should enjoy full religious freedom. We will consider the recommendation and suggestions of the supreme leader and other Shia officials about our religious affairs and accept them if they are not against our interests”.

“We hope that after 43 years of inequality, discrimination will end. Religious freedom and equal rights are resolved issues around the world. The rights of ethnic and religious minorities are respected all over the globe. We expect the authorities to give us full freedom so that we can decide our own religious affairs”, said the prominent Sunni scholar of Zahedan, capital of Iranian Balochistan.

“The officials should only monitor the affairs, not interfere”, he urged.

Religious freedom and fair distribution of positions are two demands of the Sunnis
Referring to the role of Sunnis in the victory of the current president (Mr. Raisi) in the presidential election, the most prominent Iranian Sunni leader said: “Sunnis voted for president Raisi and played a key role in electing the 13th president of the Islamic Republic of Iran. We voted for Raisi to convey our message to the officials and get our due rights”.

“When the judiciary, the legislature and the executive branches of the power in the country are aligned with the Supreme Leader, the problems should be resolved more easily”, said the Friday Khateeb of Zahedan.

“Sunnis have been demanding equal rights since the beginning of the Islamic revolution of Iran”, he further said.

“We are Iranians by origin and genuinely. Our forefathers fought against alien invaders and they were killed in defense of country’s borders; therefore they should not be deprived of their rights. The freedom of speech and distribution of positions are two main demands of Sunnis of Iran that should be resolved soon”, said president of Darululoom Zahedan.

“We are not disappointed yet. We want our full rights. We should be engaged in the cabinet of the government, in the judiciary posts, in the armed forces, and in all key positions of the country.
We ask the authorities to give us positions in the provincial capitals, or at least in the provincial capitals of the Sunni majority cities”, he added more.

Imam of the Grand Makki Mosque of Zahedan went on to say: “Sunnis belong to Iran but with no equal rights. Religious minorities are not treated this way anywhere of the world. The Sunnis have accompanied the officials in the most difficult circumstances, presented in all scenes, and played an important role in national security and unity”.

“I hope that the authorities will take effective steps in giving Sunnis their full rights”, said the most influential Iranian Sunni leader.

Security forces should not shoot at common people
Criticizing the security forces’ over shooting at people in some cases, the most outstanding Iranian Sunni leader said in the Eid-al-Fitr prayers ceremony of Zahedan: “Although the security forces are trying to establish security and their efforts are commendable, but sometimes we witness that the police are shooting at suspicious people. They should not shoot at unarmed people and those who have not been convicted”.

He strongly forbade firing on fuel carriers, saying: “People turned to the fuel business to make livelihood because of the lack of jobs; security forces should not shoot at them. The government should provide jobs for people instead of shooting them. People should also obey the rules and regulations”.

“Unfortunately, many people in prisons are executed for drug trafficking; despite mass executions, people still do not avoid from drug dealing”, president of Darululoom Zahedan noted.

He advised people: “Do not carry drugs because Allah Almighty has guaranteed your sustenance, choose other ways to earn a living”.

Sunnis celebrated Eid-al-Fitr according to their jurisprudence
Referring to the announcement of Eid-al-Fitr by the Sunni Moon-sighting Center of Iran, the most influential Iranian Sunni leader considered such an action in accordance with Sunni jurisprudence and their religious right.

Shaikh Abdol-Hamid said: “We have always tried to keep Iranian Muslims in harmony with each other during Ramadan and Eid. We make efforts for unity and cohesion; unity is in the interest of our society and nation”.

Referring to the fact that the Sunnis of Iran announced Eid-al-Fitr one day before their Shiite countrymen, the Friday prayer leader of Sunnis in Zahedan noted: “We have always maintained unity and brotherhood, but in jurisprudential matters, there are issues that we must observe. It is our duty to be careful in jurisprudential and religious matters. In the Islamic Republic of Iran, everyone must practice his own jurisprudence; all must respect each other’s religion and maintain brotherhood and fraternity”.

“The fact that we saw the moon of Shawal and celebrated Eid-al-Fitr relieved our conscience. If we fasted in such circumstances and told people to fast, our conscience would be upset and we would feel guilty before Almighty Allah. We acted according to our jurisprudence. Whenever the rules of jurisprudence and Shari’ah are followed, the conscience is relieved”, said the Iranian Sunnis’ leader.

“We are brothers, but in jurisprudential matters, everyone acts according to his religion,” he underlined.

Murder is the biggest sin after polytheism
In a part of his Eid-al-Fitr speech of Zahedan, Shaikh Abdol-Hamid condemned the unjust killing of people saying: “Allah Almighty has said about the children of Israel, the source of murder is sin”.

“Wherever sin increases, murder increases more. In many cases, people use weapons against each other.
The Prophet PBUH said: Whoever takes up arms against us (Muslims) is not from us”, said Mawlana Abdol-Hamid.

“Do not allow your children to carry weapons. Murder destroys families and communities. Murder leads to the hell and the anger of Almighty Allah. Do not get involved with anyone and wait if someone gets involved with you”, Shaikh Abdol-Hamid advised the people to avoid killing each other in his last points of this part of Eid-al-Fitr prayers ceremony of Zahedan.