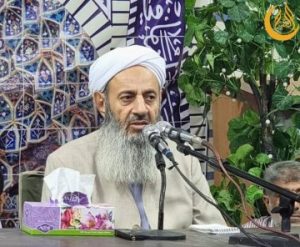 Referring to the destruction of houses and rooms hired by Imam Abu Hanifah seminary in Azimabad village of Sistan, northern part of Sistan and Balochistan, by Iranian security forces in 2008, the most influential Iranian Sunni leader asked the officials to issue a construction permit for this religious center. He urged in his latest visit to the seminary on March 27, 2022.

Talking at the graduation ceremony of Imam Abu Hanifah seminary, the Friday prayer leader of Sunnis in Zahedan said: “The students of Imam Abu Hanifa seminary of Azimabad have been living in people’s houses for years; they have been suffering so many hardships and difficulties for thirteen years. Now is the time for the authorities to issue a permit construction to build this seminary next to the village of Azimabad.”

President of Darululoom Zahedan urged on ending the problems by saying: “It is the time to solve the problems, eliminate discrimination, and remove the obstacles. All Iranians should have equal rights.”

“Shiites and Sunnis have historical ties in Sistan-Baluchestan. We must maintain unity and fraternity and respect each other’s rights,” he underlined.

Shaikh Abdol-Hamid further said: “We hope that water of Sistan [from Afghanistan] will flow forever. We are happy that there is an Islamic government in the neighborhood of our country and we take this as a good omen. We expect that the dear nation of Afghanistan will get rid of pains forever.”

“We recommend the officials of the Islamic Republic of Iran and the neighboring countries to administer justice. Justice increases security. Keeping “Allah” and “the people” is the best policy. Officials should be “honest” with people when they promise,” he concluded his points.